Share
Facebook Twitter LinkedIn Pinterest Email
(NEW YORK, NY. / December 7, 2022) — Alison Rey is thrilled to announce that she will make her New York City feature dancing debut with a special one-night engagement at the upscale Sapphire 39 gentlemen’s club this Saturday, December 10.
The event will also mark the stage debut of the popular adult film star’s amazing new boob job.
“I am so stoked to be going to New York to feature dance,” said the beauty, who hit the dance stage for the first time at Sacramento’s Gold Club Centerfolds back in April.
“For my entire career, people have been asking me if I’ll be coming to the East Coast for conventions and I’ve never made it over that way before. I think dancing in New York is a great opportunity for those fans to not only come see me live and in person, but also get up close and personal with me.
“I have to say, it’s a little bit intimidating going to a big city like New York to dance,” Rey continued. “I just want to give everyone a great show and I really hope the crowd brings the energy and we have the best night ever!”
After her Saturday night dance performance, the multi-nominated film star will also hold a meet and greet session. Fans will be able to get an autograph or picture with the magnetic performer, as well as purchase some of her keepsake collectible merchandise.
Sapphire 39 is located at 20 West 39th Street, New York, NY 10018, and is open weekdays from 6 p.m. to 4 a.m., and from 7:30 p.m. to 4 a.m. on Saturday nights.  Proper ID & attire required.  Call (212) 421-3600 for information.
The city’s premier gentlemen’s club located in Midtown Manhattan, Sapphire 39 offers deluxe amenities including designer suites with private butlers, concierge services, great food, and varying themes to satisfy every indulgence. With 10,000 square feet of space, 8,000 lovely ladies on staff and all the VIP amenities you could dream of, Sapphire New York is sure to make every man’s fantasies come true. 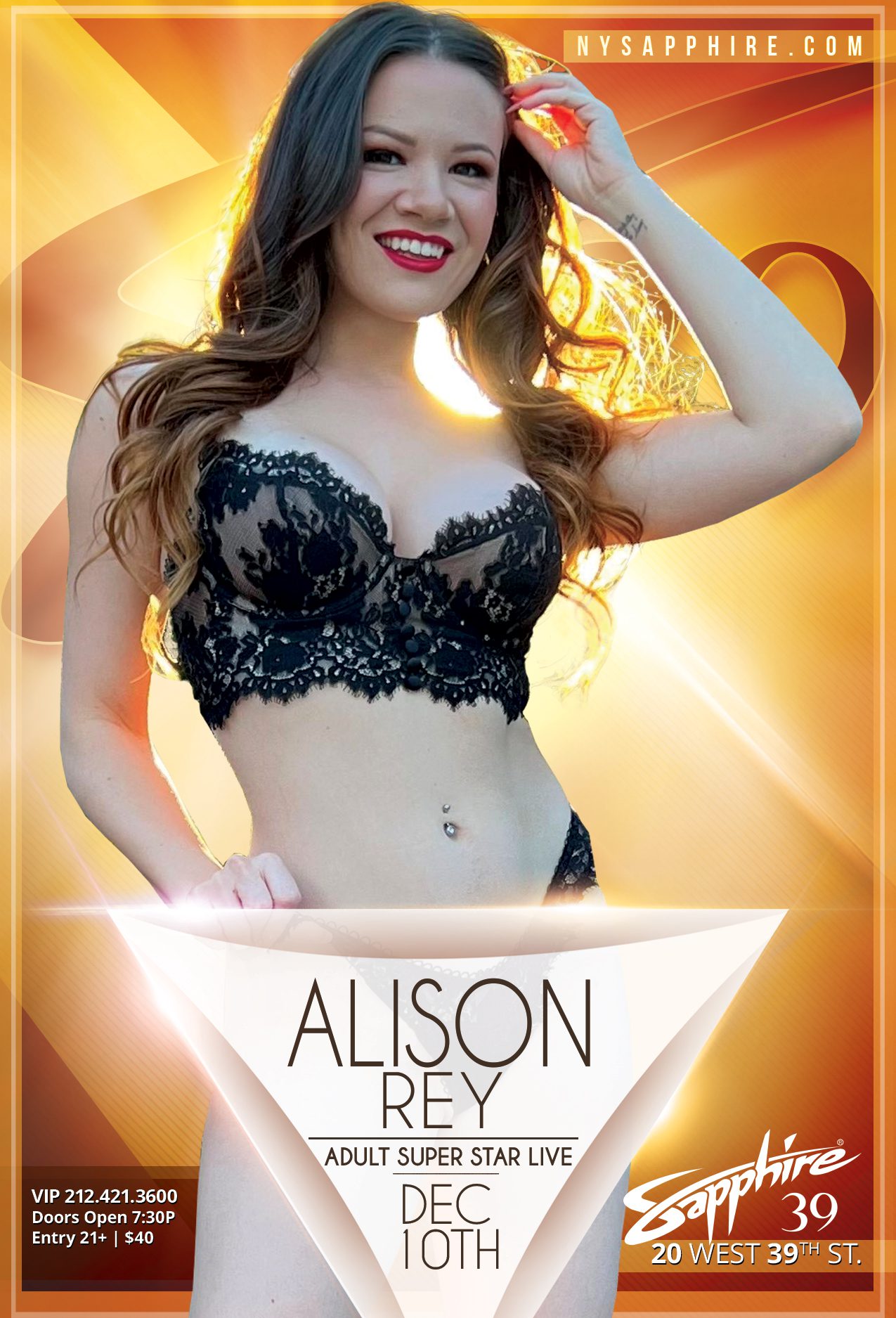 For more information about Alison Rey’s December 10 appearance at Sapphire Times Square, or the club’s VIP amenities, visit the club’s website ( https://www.nysapphire.com/NY-Sapphire-39-Adult-Star-Alison-Rey-Live.html ) or call (212) 421-3600.
To learn about the club’s Adult Star Packages visit here, and book a deluxe VIP package here.
Visit Sapphire 39 on the web at www.nysapphire.com. Follow them on Instagram: @NYSapphire_39 and Twitter @NYSapphire39.
Alison Rey is represented by The Lee Network for feature dance appearances.  For bookings, please contact The Lee Network by calling (323) 850-6111, or email derek@theleenetwork.com.
Follow The Lee Network on its new Twitter account: @LeeNetworkNV,
Keep up Alison Rey’s exploits on Twitter: @AlisonReyxxx,  her new Instagram: @areyosunshine, TikTok: @alisonunhinged, and her personal website, AlisonReyFans.com.
Alison Rey is represented by ATMLA for professional film and videos shoots.
About Alison Rey
A multi-nominated adult performer and model, the alluring Alison Rey exploded into the World of X in 2014, with wholesome girl next door looks, and an emphatically unwholesome sexual prowess. Her powerhouse performances and acting chops have earned Rey an avid fan following via her scene work for studios such as Brazzers, Adam & Eve, Jules Jordan Video, Penthouse, HardX, New Sensations, Naughty America, Hustler Video, TeamSkeet, Mile High Video, Twistys, Missa X, Reality Kings, Mofos and many more.
Rey says her favorite thing about being a part of the adult industry is “feeling free to be myself. Most of my life, I felt like the black sheep because I was different from everyone else, I embraced my sexuality, and I was a little bit weird. I think the outside world is much quicker to judge than the people I currently surround myself with, and I love being able to go to work every day and know that I am accepted for exactly who I am.”
Rey was nominated for “Hottest Newcomer” at the 2016 AVN Awards; “Best Supporting Actress” and “Best Group Sex Scene” at the 2019 AVN Awards; and “Most Epic Ass” at the 2020 AVN Awards; and “Best Sex Scene – All-Girl” at the 2021 XBIZ Awards.
In October 2021, Rey acted as a presenter at the 37th annual XRCO Awards in Hollywood, and joined a roundtable of expert phone sex practitioners to discuss the secrets of their success in a feature for HUSTLER Magazine. In November, she discussed underrated and overhyped sex positions for Mashable.
The busy Rey, recently signed with The Lee Network, the leading provider of adult star feature entertainers to clubs across the U.S., and was an earth-shaking success when she hit the dance stage for the very first time at Gold Club Centerfolds in the Sacramento Metropolitan Area, in April 2022.
The sultry performer/director recently announced a return to her roots with a renewed focus on performing and creating content for her fans, after a year of flexing her behind-the-camera prowess.
She is currently nominated in the category of Best Sex Scene — All-Girl in the 2023 XBIZ Awards.
Rey provides fans an unparalleled level of access via her premium OnlyFans.
She resides in Los Angeles.
About The Lee Network:
Since 1989, The Lee Network has been the premier source for adult film stars, having played a leading role in shaping the feature entertainment business of the gentlemen’s club Industry around the globe. From legends of the past to stars of today, including Joanna Angel, Cherie DeVille, Jill Kassidy, Jillian Janson, Nikki Benz, Sarah Jessie, Elena Koshka, Alison Rey, Teal Conrad, Natalia Starr and Brenna McKenna, to top magazine models, showgirls, mainstream celebrities, and reality TV stars, no other agency can boast of such a star-studded lineup.
The company’s resources are unmatched, and its clients rank among the very best, most well-established and respected club owners and managers in the business — many of whom have worked with The Lee Network for over 15 years!
For a complete list of talent represented by The Lee Network, visit its official site: TheLeeNetwork.com.
Contact:
Michael Whiteacre
HoneyHouse PR
PR@HoneyHouseXXX.com
775-742-8425
Twitter: @HoneyHousePR
#  #  #
Alison Rey Sapphire 39
Share. Facebook Twitter Pinterest LinkedIn Tumblr Email
Previous ArticleAEBN Co-Founder Jay Strowd is this Week’s Guest on Adult Site Broker Talk
Next Article Pantyhose? Fans Utopia Reveals Fetishists’ Favorite Erotic Items from Stars