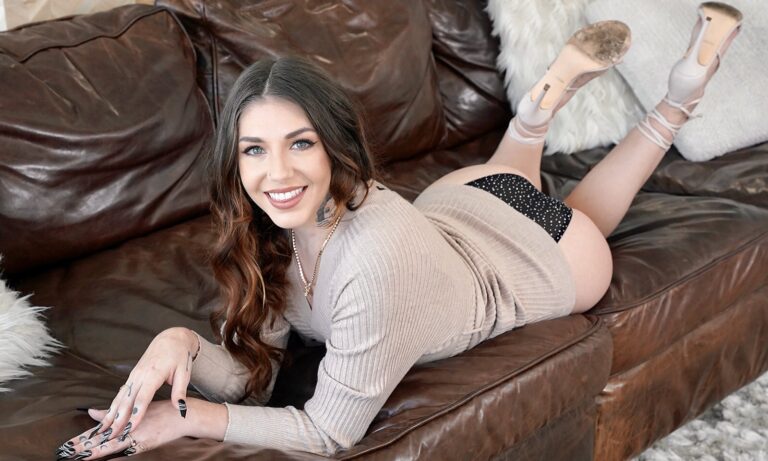 Share
Facebook Twitter LinkedIn Pinterest Email
(PHILADELPHIA, Penn. / August 25, 2022) — Brenna McKenna, porn’s inked sexual dynamo, opens up in a revealing new interview for Adult DVD Talk.
In her sexy, frank conversation with iconic writer and film reviewer, Captain Jack, McKenna discusses the origin of her nom de porn, her business degree, her pre-porn sexual experiences with men and women, the “super-amazing adrenaline rush” of her first adult film performance, and what she enjoys doing when she isn’t filming.
“I like going to clubs and dancing. And I bring my hot girlfriends; we just have so much fun. Sometimes we make-out and we have sleepovers after.  . . . We just put on a show for hot guys because we’re bad bitches,” the green-eyed brunette beauty reveals.
“Being able to tell stories and let fans take a peak into my life is exciting for me,” said McKenna. “Captain Jack was so easygoing and great to talk to, and I was comfortable opening up for the world to see.
“Now that people know me more, I feel connected and very lucky to have fans and people who even care to learn about me at all.”

Captain Jack remarked, “Brenna was a joy to talk to; her personality is so infectious, it’s impossible to have a bad time with her. She was one of the most fun interviews I’ve ever had.

Read McKenna’s’ revealing interview in its entirety at Adult DVD Talk ( https://interviews.adultdvdtalk.com/brenna-mckenna/ ).
For more information, follow @TheAdultDVDTalk and @CaptainJack_ADT on Twitter.
Check out McKenna’s recent three-girl sapphic scene for She Seduced Me, the innovative adult studio helmed by veteran director Alan X focusing on the art of lesbian seduction.  Entitled “Stealing My Stepsister’s Girlfriend,” the scene finds McKenna portraying the evil step-sibling who is always conniving to steal Madi Meadows’ girlfriends — including the alluring Lexi Lore!
Connect with Brenna McKenna on Twitter: @BrennvMcKennv.
Brenna McKenna fans are invited to check her out on FreeOnes: freeones.com/brenna-mckenna.
McKenna treats admirers to an unparalleled level of access via her OnlyFans account, which is updated daily with images and videos that you can’t see on her public accounts.
Professional producers may contact her directly via [email protected] for booking information.
McKenna is available for feature dance appearances via The Lee Network / @LeeNetworkNV.
About Brenna McKenna:
Adult film starlet Brenna McKenna is a supernova of sexual energy and positive attitude.
Born and raised on the southern end of the great state of New Jersey, Sunday churchgoer McKenna attended a private high school on a softball scholarship before putting herself through college in Philadelphia as a stripper. After earning her business degree in Fashion Industry Management, she realized that she loved exotic dancing so much, she decided to make it her career.
For the 21 year-old, stripping had opened a path on her life’s journey of exploring her hitherto unexcavated sexual powers. But when the COVID pandemic panic came, and the clubs were shuttered, McKenna pivoted to OnlyFans. She eventually reached out to an adult talent agency, and filmed her debut porn scenes in March 2021.
With years of stripping experience under her belt, McKenna has also moved into feature dancing by signing with industry leader The Lee Network and debuting at New York City’s Sapphire 60 in June 2022.
She resides in Philadelphia.
Contact:
Michael Whiteacre
HoneyHouse PR
[email protected]
775-742-8425
Twitter: @HoneyHousePR
#   #   #
Adult DVD Talk. Brenna McKenna Captain Jack inked McKenna
Share. Facebook Twitter Pinterest LinkedIn Tumblr Email
Previous ArticleMaitland Ward Signing Rated X Memoir Sept. 15 at Brooklyn’s Powerhouse Books @ Archway
Next Article Carnival Cruise Line will OK Covid self-tests for unvaccinated guests