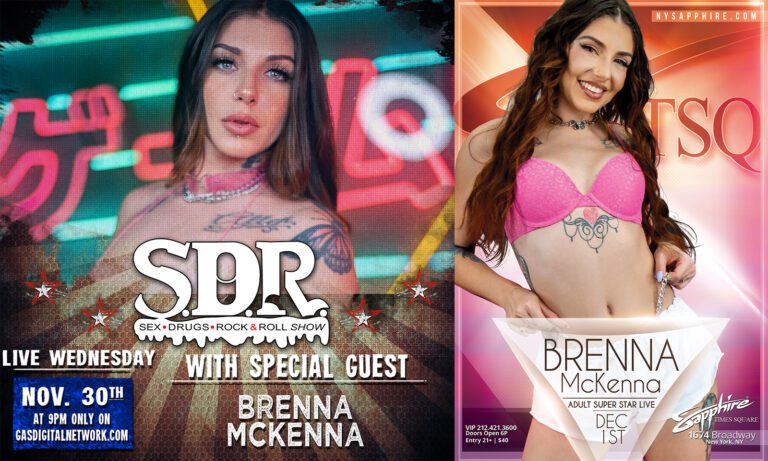 Tune in tonight at 9 pm ET / 6 pm PT on GasDigitalNetwork.com.

The brunette beauty also makes her first visit to the Sapphire Times Square gentlemen’s club in New York City, on Thursday night, December 1, to perform a special one-night feature dance engagement. The engagement is extra-special for McKenna, because she made her feature dance debut at sister club Sapphire 60n this past June.
“I feel so much excitement going into Thursday night for a round 2 in NYC again with Sapphire Tims Square and I can’t wait to meet more people,” said McKenna.
“Coming in early to do an outrageous interview one the SDR Show LIVE, and then finishing off by performing for my amazing fans — what a way to start the weekend off right!”
After her Thursday night dance performance, the star will also hold a meet and greet session. Fans will be able to get an autograph or picture with her, as well as purchase some of her keepsake collectible merchandise.
Sapphire Times Square is located at 1684 Broadway, New York, NY 10019.
Doors open at 6 p.m.  21+, proper ID & attire required.
For more information about Brenna McKenna’s Dec. 1 appearance at Sapphire Times Square, or the club’s VIP amenities, visit the club’s website ( http://nysapphire.com/NY-Sapphire-Times-Square-Adult-Star-Brenna-McKenna-Live.html ) or call (212) 421-3600.
To learn about the club’s Adult Star Packages visit here ( https://www.nysapphire.com/NY-Sapphire-Adult-Star-Packages.html ), and book a deluxe VIP package here ( https://www.nysapphire.com/NY-Sapphire-VIP-Packages.html ).
Visit Sapphire Times Square on the web at www.nysapphire.com. Follow the club on Twitter: @NYSapphireTSQ.
Brenna McKenna is also celebrating the first award nomination of her young career, from the 2023 AVN Awards.
The powerhouse performer famous for her love of sex was recognized with a nod for Best Oral Sex Scene for her epic, exceptionally messy performance in “A Lady With a Schedule” ( https://www.teamskeet.com/movies/a-lady-with-a-schedule ) from Team Skeet’s This Girl Sucks sub-site, in which she goes from nerdy to dirty with veteran male performer Ike Diezel.

Brenna McKenna fans are invited to check her out on FreeOnes: freeones.com/brenna-mckenna.
McKenna treats admirers to an unparalleled level of access via her OnlyFans account ( https://onlyfans.com/brennamckenna ), which is updated daily with images and videos that you can’t see on her public accounts.
Read her revealing AdultDVDTalk interview here ( https://interviews.adultdvdtalk.com/brenna-mckenna/ ) and find her October 2022 profile in NightMoves Magazine here ( https://nightmovesonline.com ).

Follow The Lee Network on its new Twitter account: @LeeNetworkNV,
About Brenna McKenna:
One of the most classically beautiful women to ever grace adult films, Brenna McKenna is also a supernova of sexual energy and positive attitude.
Born and raised on the southern end of the great state of New Jersey, Sunday churchgoer McKenna attended a private high school on a softball scholarship before putting herself through college in Philadelphia as a stripper. After earning her business degree in Fashion Industry Management, she realized that she loved exotic dancing so much, she decided to make it her career.
For the 21 year-old, stripping had opened a path on her life’s journey of exploring her hitherto unexcavated sexual powers. But when the COVID pandemic panic came, and gentlemen’s clubs were shuttered, McKenna pivoted to OnlyFans. She eventually reached out to an adult talent agency, and filmed her debut porn scenes in March 2021.
Since then, the magnetic performer has divided her work time between the Los Angeles, Las Vegas and Miami filming hubs, producing her own content and starring in productions by Bang Bros, LeWood, Bang!, Mike Adriano, She Seduced Me, Team Skeet, FreakMob Media, Sex Selector, Perv City, Swallowbay, and many more.
With years of stripping experience under her belt, McKenna has also moved into feature dancing by signing with industry leader The Lee Network and debuting at New York City’s famed Sapphire 60 gentlemen’s club in June 2022.  In October she was a presenter as the 30th annual NightMoves Awards in Tampa, Florida.
She is currently nominated for Best Oral Sex Scene in the 2023 AVN Awards.
McKenna resides in Philadelphia.
About The Lee Network:
Since 1989, The Lee Network has been the premier source for adult film stars, having played a leading role in shaping the feature entertainment business of the gentlemen’s club Industry around the globe. From legends of the past to stars of today, including Joanna Angel, Cherie DeVille, Jill Kassidy, Jillian Janson, Nikki Benz, Sarah Jessie, Elena Koshka, Alison Rey, Teal Conrad, Natalia Starr and Brenna McKenna, to top magazine models, showgirls, mainstream celebrities, and reality TV stars, no other agency can boast of such a star-studded lineup.
The company’s resources are unmatched, and its clients rank among the very best, most well-established and respected club owners and managers in the business — many of whom have worked with The Lee Network for over 15 years!
For a complete list of talent represented by The Lee Network, visit its official site: TheLeeNetwork.com.
Contact:
Michael Whiteacre
HoneyHouse PR
PR@HoneyHouseXXX.com
775-742-8425
Twitter: @HoneyHousePR
#   #   #
Brenna McKenna Sapphire Times Sq SDR Show
Share. Facebook Twitter Pinterest LinkedIn Tumblr Email
Previous ArticleMYLF Offers Two Scorching New Scenes Starring Bunny Madison, Lily Lane
Next Article Disruptive Films Presents “A Virgin No More: Retaliation”