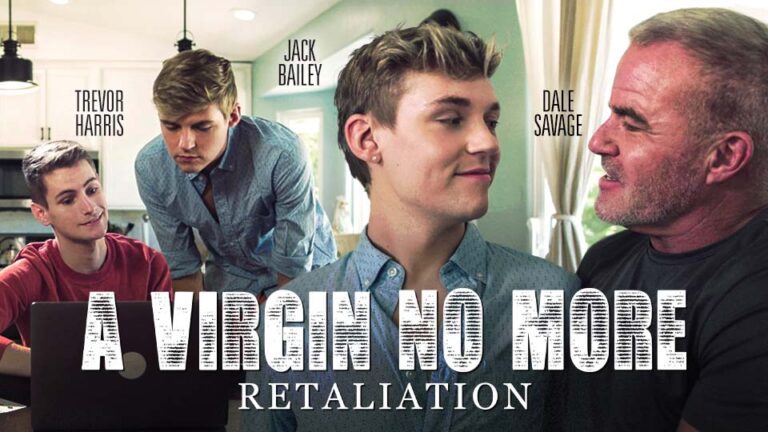 Share
Facebook Twitter LinkedIn Pinterest Email
(Montreal, QC / November 30, 2022) — Award-winning gay cinema brand Disruptive Films announces the November 25 release of the third and final installment of its unsettling erotic series from Taboo Men, “A Virgin No More: Retaliation”.
Following the story of young Toby (Jack Bailey), who is “A Virgin No More” after paying an overnight visit to his dad’s best friend ‘Uncle’ Carl (Dale Savage), and a devious instigator for setting up unsuspecting friend Will (Scott Finn) with the older man to curry favor in “The Offering”, is now looking to settle a score with the help of his roommate (Trevor Harris).

According to director Walden Woods, whose twisted tale won raves, drew praise and had fans begging for a sequel after its September ’21 debut, “Virgin No More has been one of my favorite stories to tell from start to finish; we’ve watched Dale, Scott, Trevor and Jack really evolve their characters over three films.

“I am very proud of what each one of them brought to the table; between Uncle Carl and the innocent Toby, we were able to create a world around them that really led us to some intense storylines. I hope you enjoy, what I think will be the final chapter for Uncle Carl….unless we follow him to his next destination!”

Disruptive Films’ risk-taking storytelling, character development, and acting opportunities for its stars have been the cornerstone of the brand’s success, and fans have enjoyed following the journey of Bailey’s Toby. He, in turn, has loved bringing Toby to life and putting his story to bed (so to speak) in the final chapter.

“I’ll say I thought the ending of the scene was perfect; it’s exactly what Uncle Carl deserved. I feel like Toby finally got justice, and it was a great ending to a trilogy of scenes. I think fans are going to love the ending!” said Bailey.
Everyone wants to see Uncle Carl get what he deserves, including Dale Savage, the talent behind the character: “It’s truly been an honor playing Uncle Carl throughout this series,” said Savage. “It definitely hit a nerve that many can directly relate to. Plus it’s amazing to be surrounded by the best models, best directors, crew and writers in the industry to make it all happen.”
Find “A Virgin No More: Retaliation”, ”A Virgin No More: The Offering” and “A Virgin No More”, part of Disruptive Films and Gamma Films Group/Alpha Studio Group’s exciting lineup of films, at  DisruptiveFilms.com and follow on Twitter @filmsdisruptive.
About Disruptive Films:
Launched in 2021, DISRUPTIVE FILMS is a brand new studio dedicated to offering the most original gay porn movies and series available today. Our premium lineup of films and original series combine award-winning creative talent, cinematic techniques, compelling stories, and men in acting and sex performances like you’ve never seen before.  Created in collaboration by Bree Mills, Gamma Films Group, and Alpha Studio Group, the production arm behind such iconic gay brands as Next Door Entertainment, Pride Studios, and Active Duty. Twitter: @JessicaxJasmin
About Gamma Entertainment:
Built in 1996, Gamma Entertainment is an award winning company specializing in multimedia and e-commerce. As an industry leader in web technology, Gamma partners with some of heaviest hitters in the adult production scene such as Evil Angel, Girlfriend Films, Falcon Studios, and more. A solid reputation, strong technical knowledge, and a genuine approach to building relationships are the main principles instilled in Gamma Entertainment.