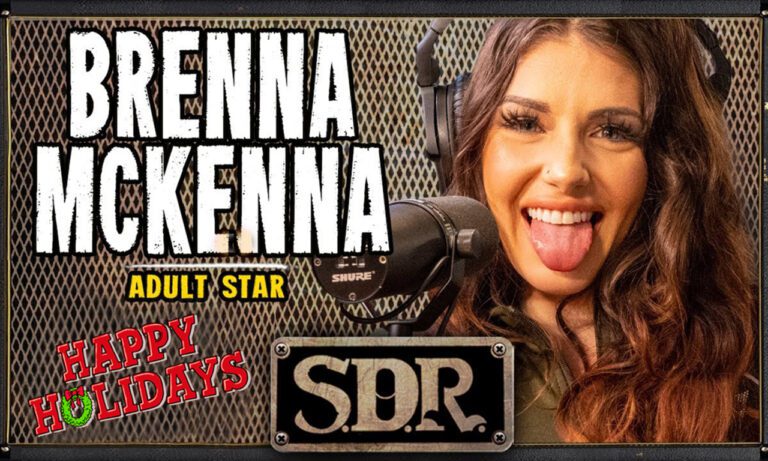 Share
Facebook Twitter LinkedIn Pinterest Email
(NEW YORK, NY. / December 20, 2022) — LIVE this Wednesday night, adult film star Brenna McKenna returns to The SDR Show with Big Jay Oakerson and Ralph Sutton for the popular New York City podcast’s Holiday Episode — and she’s bringing some of her favorite girlfriends with her to deliver some holiday cheer!
Host Sutton explained, “Games, drinking, partial nudity, and more — all guaranteed to get your yule log fired up and your nuts roasting. So pour yourself a glass of eggnog, or Manischewitz as the case may be, head over to TheSDRshow.com/LIVE at 9PM ET / 6 pm PT, and see if you can beat Santa’s record of only coming once a year before the hour is up.”
McKenna asked rhetorically, “What more could you want for Christmas or Hanukkah than three bisexual strippers? Exactly what I thought, too!
“So, I’m bringing some baddies up to NYC to party and put on a show for YOU!  We’ll get your fire started with our hard nipples and warm personalities, so cum join us on the SDR Show on Wednesday night!”

Enjoy McKenna’s wild debut appearance on The SDR Show here.
The inked dynamo is also celebrating the first award nominations of her young career, from the 2023 AVN Awards.
The powerhouse performer famous for her love of sex was recognized with a nod for Best Oral Sex Scene for her epic, exceptionally messy performance in “A Lady With a Schedule” from Team Skeet’s This Girl Sucks sub-site.
McKenna is also up for Hottest Newcomer in the AVN Awards’ Fan Voting competition.  Admirers can vote daily for her here ( https://avn.com/awards/voting/hottest-newcomer ).

Brenna McKenna fans are invited to check her out on FreeOnes: freeones.com/brenna-mckenna.
McKenna treats admirers to an unparalleled level of access via her OnlyFans account ( https://onlyfans.com/brennamckenna ), which is updated daily with images and videos that you can’t see on her public accounts.
Read her revealing AdultDVDTalk interview here.

Brenna McKenna is available for professional bookings directly, or via Zen Models.

She is represented by The Lee Network for feature dance appearances.

About Brenna McKenna:
One of the most classically beautiful women to ever grace adult films, Brenna McKenna is also a supernova of sexual energy and positive attitude.
Born and raised on the southern end of the great state of New Jersey, Sunday churchgoer McKenna attended a private high school on a softball scholarship before putting herself through college in Philadelphia as a stripper. After earning her business degree in Fashion Industry Management, she realized that she loved exotic dancing so much, she decided to make it her career.
For the 21 year-old, stripping had opened a path on her life’s journey of exploring her hitherto unexcavated sexual powers. But when the COVID pandemic panic came, and gentlemen’s clubs were shuttered, McKenna pivoted to OnlyFans. She eventually reached out to an adult talent agency, and filmed her debut porn scenes in March 2021.
Since then, the magnetic performer has divided her work time between the Los Angeles, Las Vegas and Miami filming hubs, producing her own content and starring in productions by Bang Bros, LeWood, Bang!, Mike Adriano, She Seduced Me, Team Skeet, FreakMob Media, Sex Selector, Perv City, Swallowbay, and many more.
With years of stripping experience under her belt, McKenna has also moved into feature dancing by signing with industry leader The Lee Network and debuting at New York City’s famed Sapphire 60 gentlemen’s club in June 2022.  In October she was a presenter as the 30th annual NightMoves Awards in Tampa, Florida.
She is currently nominated for Hottest Newcomer and Best Oral Sex Scene in the 2023 AVN Awards.
McKenna resides in Philadelphia.
Contact:
Michael Whiteacre
HoneyHouse PR
PR@HoneyHouseXXX.com
775-742-8425
Twitter: @HoneyHousePR
#   #   #
Bang Bros Bang! Brenna McKenna FreakMob Media LeWood Mike Adriano Perv City SDR Show Sex Selector She Seduced Me Swallowbay Team Skeet
Share. Facebook Twitter Pinterest LinkedIn Tumblr Email
Previous ArticleSanta Brings the Perfect Present for Paris Banks in New OnlyFans Scene
Next Article Adira Allure Guests on ‘And Now We Drink’