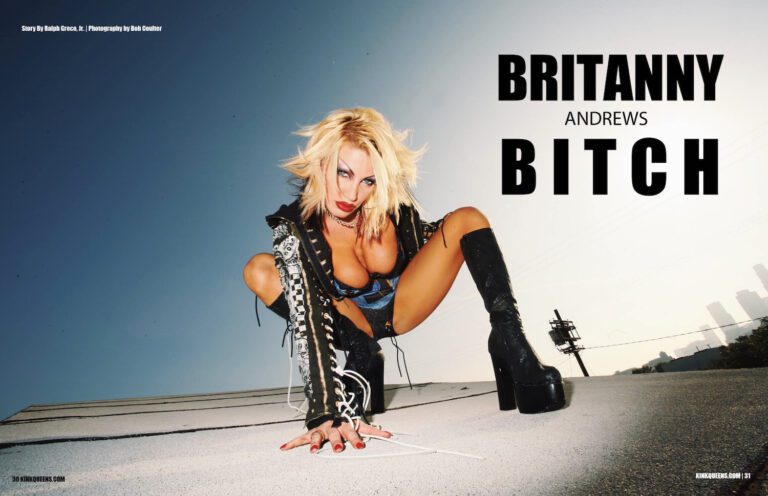 Share
Facebook Twitter LinkedIn Pinterest Email
(Las Vegas, NV) Legendary award-winning adult star and filmmaker Brittany Andrews has had an incredible 2022, and she’s ending the year with a bang and another magazine cover, and this time it’s for Kink Queens.
On the cover of Kink Queens Issue 46 Winter 2022, Brittany Andrews is commanding and glamorous, dressed all in latex, holding a crop with “Brittany Andrews: The Mistress Mommy We All Want and Need!” to the left of her. Her feature “Brittany Andrews Bitch” runs from page 30 to Page 69, and the 40 pages of photos and interview take up half the 80-page issue. There is a massive number of photos showing Brittany in an array of looks and personas is shot by Bob Coulter and Bagley Photo. And the exclusive interview with Ralph Greco Jr. is both educational and insightful. It opens with a brief overview of how Brittany started her career and many accolades over 30 years, and then talks about fetish and transcending trauma as a Dominatrix, being known as the Pioneer of Pegging, her curiosity about the sounding fetish, what makes a good Domina and good submissive, future plans, links to everything Brittany, and more.
“I love the cover and feature! Whether you’ve been a fan for a longtime or you’re new to my world, you’ll definitely learn something about me…well if you can stop staring at the beautiful photos shot by Bob and Bagley. If you buy the printed version and bring it to any tradeshow I’m at next year, I’ll sign it for free,” says Brittany Andrews. 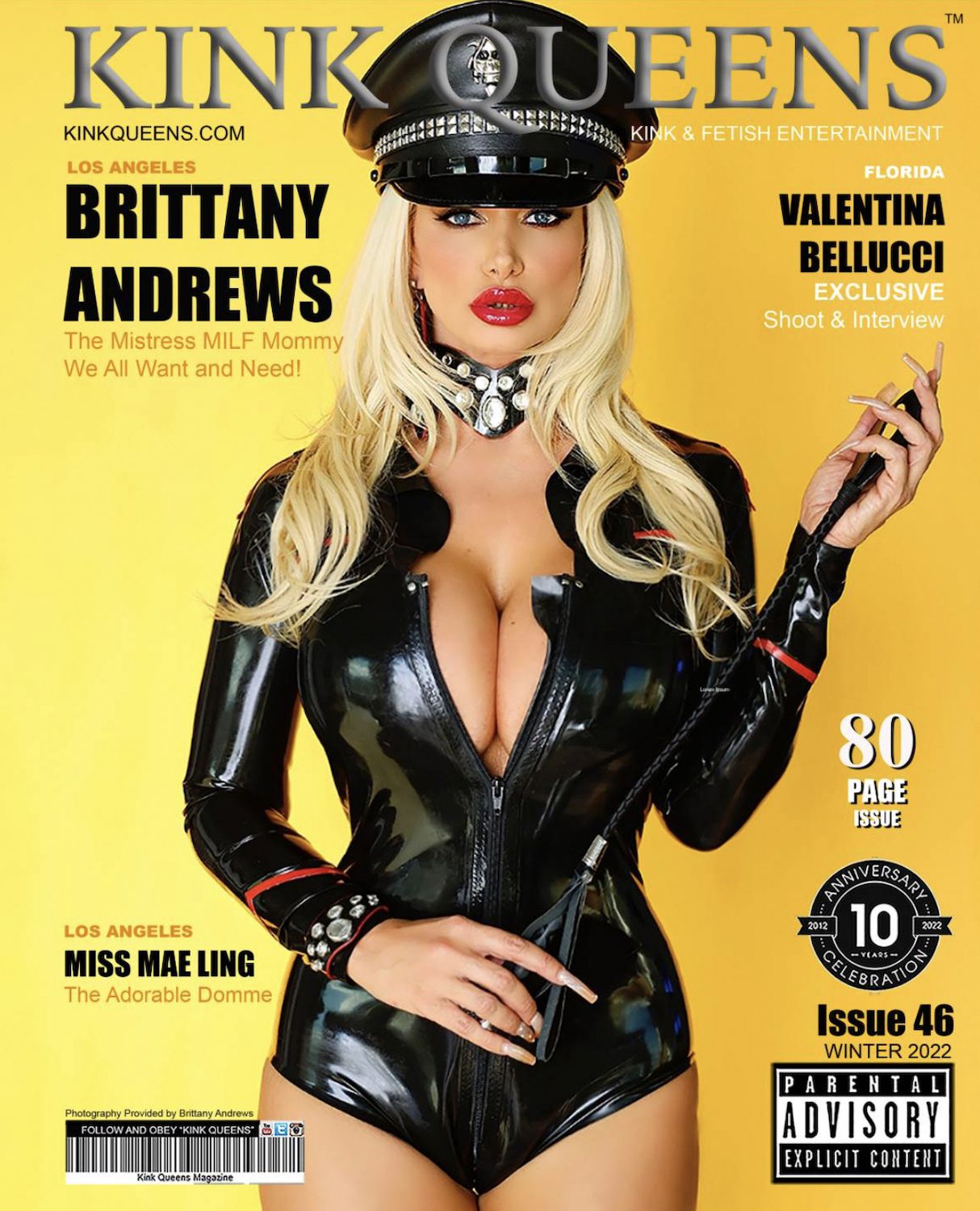 Fans and submissives can check out Brittany’s Kink in Queens magazine for free in digital format. By the end of this week, digital will be $9.99, the printed version will be $19.99, and print and digital can be purchased as a package for $19.99. Find it all at magcloud.com/browse/issue/2375663.
Brittany is available through Nexxxt Level Talent. Get her on your set by calling Andre 818.383.8147 or Jonathan at 818.326.7001 or emailing info@nexxxtlevel.com. View her new agency photos at nexxxtleveltalentagency.com/model/brittany-andrews.
To interview Brittany Andrews during EXXXOTICA for your site, publication, or show, contact Erika Icon of The Rub PR at erika@therubpr.com.
ABOUT BRITTANY ANDREWS
To say Brittany Andrews has done it all would be an understatement—she’s an award-winning adult industry icon and two-time Hall of Famer, the world-famous, jet-setting DJ BritStar who’s entertained all over the world, Multi-Award-Winning Independent Film Producer and Director, and highly entertaining comedienne.
Brittany got her start in the adult realm as an exotic dancer. The big-titted, blonde-haired, blue-eyed stunner had the classic adult star look—she began her career in adult films after meeting Jenna Jameson during a photoshoot for Hustler magazine in Jamaica. With over 600 scenes during both her stints in adult, she’s worked for all the top-shelf studios, won Favorite Domme from AVN in 2022, and been nominated for Best Actress, Best Supporting Actress, Best Fetish Director, Crossover Star of the Year, Hottest MILF, Fetish Performer of the Year, and nominated for her scene work. In 1997, she launched BritCo Pictures in Los Angeles. She owned and operated it for over 10 years, and released many highly sought-after series, including Brittany’s Exquisite Feet line and her best-selling and controversial series, Brittany’s Bitch Boyz.
Brittany has guested on The Howard Stern Show 11 times, and two of her appearances made the list of his Top 25 shows. She’s appeared in countless publications worldwide, including the Wall Street Journal, New York Post, Page 6, Variety, Time Out NY, Penthouse, Cosmopolitan, Rolling Stone, Muscle & Fitness, and fetish mags Kink Queens and Darkside. Brittany has also graced over 50 adult magazine covers and appeared in over 300 layouts. Entertainment Tonight and Cosmo named her as one of the Top 10 Porn Stars, and Playboy magazine featured her in the Top 10 Adult Films Stars of All Time collector’s issue.
Brittany hosted over 10 of the Playboy Channel’s best productions such as Nightcalls, Nightcalls 411, Hot Rocks, Inside Adult, Adult Stars Flying Solo, Playboy’s Hard Drive, and Sexcourt. She also held the coveted title of The Sexpert for over 10 years on a variety of shows.
After shutting down BritCo, she moved to NYC and started her production company in 2003. Discipline FilmWorks produced reality shows like My Real Porn Life (Winner of Best Reality Short at New York Independent Film Festival) and a slew of films that won multiple awards. Brittany also scored a Best Actress award from the New York International Film Festival.
Brittany continues to be a mover and a shaker and takes the international club scene by storm as DJ BritStar with her turntables, traveling the globe, and spinning alongside John Digweed, Rob Base, James Zabiela, AfroJack, and countless others. Link to all of Brittany Andrews’ social media, premium social media, and more at allmylinks.com/DJBRITSTAR.
accolades Bagley Photo Bob Coulter Brittany Andrews career cover Domina Dominatrix feature fetish interview Kink Queens photos Pioneer of Pegging Ralph Greco Jr. submissive
Share. Facebook Twitter Pinterest LinkedIn Tumblr Email
Previous Article‘Tis the Season for TeamSkeet, with Six Selected Scenes This Week
Next Article Oliver Wong Brings Sexiness & Comedy to His OnlyFans