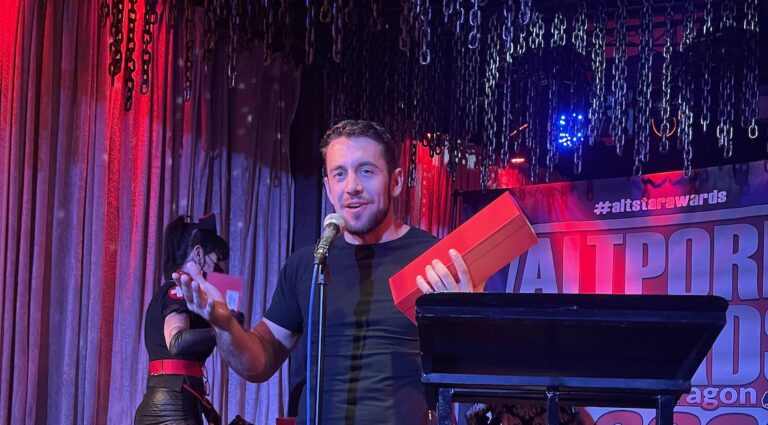 (Los Angeles, CA) Multi-award-winning, sexual fluid adult star, leading man, and top industry star Dante Colle continued his winning spree and took home the Best Male Performer of the Year trophy from the AltPorn Awards and was at the event to personally accept it.

For the second year in a row, Dante Colle took home one of the biggest awards at the AltPorn Awards—he’s the 2021 and 2022 winner for Best Male Performer of the Year. The AltPorn Awards red carpet ceremony took place Saturday night at Boardner’s in Hollywood. The event was well-attended, and VIP attendees like Dante enjoyed being on the red carpet first, enjoying an open bar, and scoring a highly desired goodie bag. Hosted by Jeffrey Damnit and Malice McMunn, the awards show was wild and entertaining. At the end of the night, the biggest awards were announced. Dante then won Best Male Performer of the Year and took to the stage to accept the coveted crystal trophy, thanking his fans and publicist.

“It was amazing to attend another in-person awards show and be able to accept my trophy on stage and not virtually. The evening was a lot of fun, and it was a great way to end it, walking away with one of the night’s biggest awards,” says Dante Colle.

Look for a full list of the night’s big winners to be posted soon to altporn.net/news/category/features/awards.

To interview Dante for your site, publication, or show, contact Erika Icon of The Rub PR at [email protected].

Dante got into the industry by responding to a Backpages ad for Corbin Fisher and was exclusive for his first four years in the biz. Since then, Dante has worked for some of the top straight, trans, bi, and gay studios, including Adult Time, Bellesa Films, Babes, Devil’s Film, Burning Angel, Deeper, Transfixed, Disruptive Films, MissaX, Pure Taboo, Digital Playground, SexLikeReal, Evil Angel, Lust Cinema, Digital Sin, Deeper, Falcon, Grooby, Kink.com, Men.com, Noir Male, TransSensual, and Trans Angels. Recently, he delved into the cryptocurrency world and became a NAFTY ambassador and will soon have his own personally designed NFTs dropping. 2022 brought a MindGeek contract and his Fleshjack toy line fleshlight.sjv.io/c/3236727/1260800/4702 launched, so his fans can take him home with them. He’s also joined the ground floor of hotline gethotline.xyz/?referral=fgrhpij as an ambassador and creator.