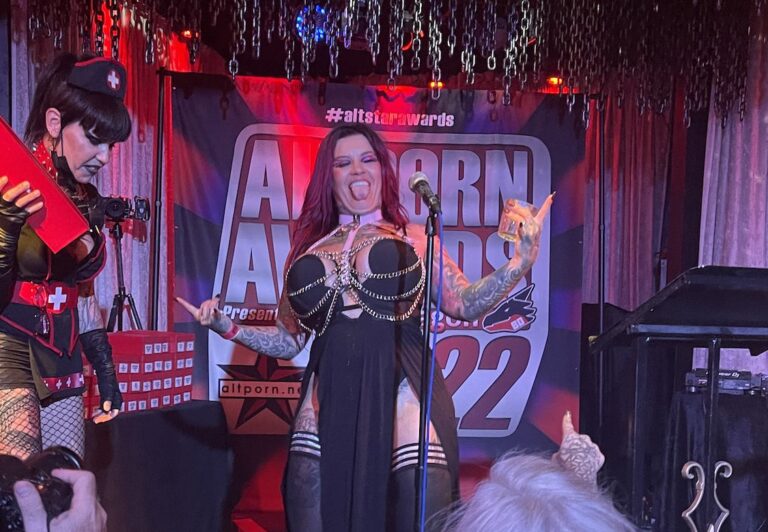 For the second year in a row, Sabien DeMonia has won at the AltPorn Awards. Last year, she won Best Gothic Shoot for “The Possession” and accepted the award online during the virtual ceremony. This year she came to Los Angeles to attend the 2022 ceremony at Boardner’s in Hollywood on Saturday night. She was one of the VIPs at the well-attended event of adult stars, creators, and fans. One of the first awards to be given out was Best Inked Clip Artist and Sabien won it. She ran on stage and made a devil horns gesture to revel in her victory, before grabbing the coveted crystal trophy from hosts Jeffrey Damnit and Malice McMunn. Sabien thanked her publicist, the AltPorn Awards, and her fans.

“I was up for three awards, and that’s always been a lucky number for me. And, of course, big boobs help. I was floored to win an award and one of the very first of the night. Celebrating with Mike Hell, Dante Colle, Misha Montana, and my other friends was great. I’ve always wanted to win this award, and I’m so happy that I did,” says Sabien DeMonia.

Look for a complete list of the night’s big winners to be posted soon to altporn.net/news/category/features/awards.