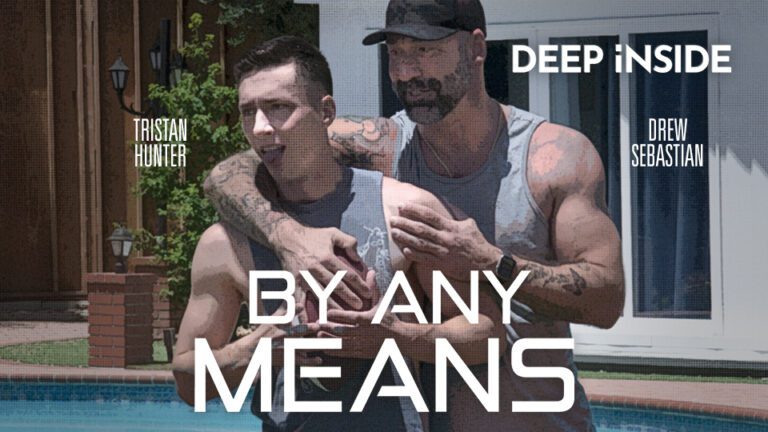 Share
Facebook Twitter LinkedIn Pinterest Email
(Montreal, QC / August 26, 2022) — Award-winning gay cinema brand Disruptive Films introduces a gripping new suspense thriller from Deep Inside and director Michael Vegas, “By Any Means” – coming to DisruptiveFilms.com on September 2.
Inspired by the Black Mirror episode “Arkangel” about an over-involved parent that keeps a constant watch over their child, “By Any Means” stars Drew Sebastian as a stepfather who is protective of stepson Atis (Tristan Hunter in his Disruptive Films debut) to the point of tracking his every movement through an implanted chip.

“I cared for Atis as best as I knew how, but I didn’t do it on my own… as soon as the chip became available, I had it implanted in my stepson; he never asked questions about it… Atis was mine, he was mine since his mother left the earth, and I wanted him to remain mine… and I knew it was time to show Atis what he meant to me…”

The mind-bending trailer for “By Any Means” is available at DisruptiveFilms.com. Follow Disruptive Films, part of the Gamma Entertainment network, on Twitter @filmsdisruptive.
About Disruptive Films:
Launched in 2021, DISRUPTIVE FILMS is a brand new studio dedicated to offering the most original gay porn movies and series available today. Our premium lineup of films and original series combine award-winning creative talent, cinematic techniques, compelling stories, and men in acting and sex performances like you’ve never seen before.  Created in collaboration by Bree Mills, Gamma Films Group, and Alpha Studio Group, the production arm behind such iconic gay brands as Next Door Entertainment, Pride Studios, and Active Duty.
About Gamma Entertainment:
Built in 1996, Gamma Entertainment is an award winning company specializing in multimedia and e-commerce. As an industry leader in web technology, Gamma partners with some of heaviest hitters in the adult production scene such as Evil Angel, Girlfriend Films, Falcon Studios, and more. A solid reputation, strong technical knowledge, and a genuine approach to building relationships are the main principles instilled in Gamma Entertainment.
Gamma has an enviable commitment to excellence across a range of different verticals, from production to paysites and beyond. Having a very honest and transparent approach to their business has helped this corporation become recognized as one of the best brands to work with in adult.