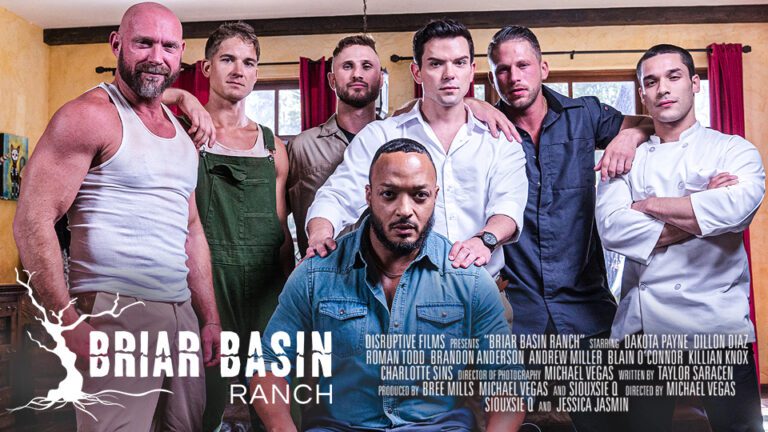 “All of my castmates were amazing to work with and brought something very special to the table… specifically the dinner table during the dinner scene. There was so much improv happening at the table that it was really hard to keep a straight face. My character was supposed to be deep in thought, catatonic, and just done with all of it. Trying not to laugh when my co-stars were dropping gems was the most challenging part of the shoot. I will never forget that scene or my very special crème brûlée.”

Vegas also enjoyed the process immensely: “Wow what a fun project! Briar Basin Ranch really brought together an all-star cast that fit the roles perfectly. Getting to see Dillon Diaz have his gangbang orgy dreams come true was a delight… so many bodies and so many muscles piled on and writhing with ecstasy. The Monster Mouth team is very proud of this project; getting to work alongside Jessica Jasmin and Siouxsie Q. was a blast, and creating this world for our characters felt oh so right. I’m so excited to show off what we made.”
Co-directors Jessica Jasmin and Siouxsie Q agree. Jasmin states, “I was very excited to be a part of this project – from sitting in the writer’s room with Taylor to being in on the action with Michael and Siouxsie Q., it was so fun to see the project come to life. I cannot stress enough how lovely the cast was, and how all the guys gave their best performances in both acting and sex. Briar Basin Ranch is a perfect example of how Disruptive Films is a creative collective – from the crew to the cast, to the editing and design teams, Briar Basin is a testament to our teamwork.”
Siouxsie adds, “This was my first time in a co-directing role for a multi-day feature, and it was such a delight to collaborate with Michael and Jessica, along with the rest of the cast and crew, to create this twisted tale. Each actor brought something special to the story, and this film includes some of the most jaw-dropping sex scenes I’ve ever seen. Dillon Diaz is such a star, and I loved seeing him shine in this role.”
The film has been touched by many talented hands, including those of award-winning writer Taylor Saracen, and Briar Basin Ranch promises to pack a punch for viewers while honoring the responsibility of telling taboo stories. Production pushes the content as far as it can while keeping compliance, and plans to wow the audience with the artistry expected from Disruptive. With high hopes of winning Gay Movie of the Year at the major award shows, Disruptive Films is proud to present Briar Basin Ranch in its entirety.
Briar Basin Ranch is available at DisruptiveFilms.com. Follow Disruptive Films, part of the Gamma Entertainment network, on  YouTube and Twitter @filmsdisruptive.
About Disruptive Films:
Launched in 2021, DISRUPTIVE FILMS is a brand new studio dedicated to offering the most original gay porn movies and series available today. Our premium lineup of films and original series combine award-winning creative talent, cinematic techniques, compelling stories, and men in acting and sex performances like you’ve never seen before.  Created in collaboration by Bree Mills, Gamma Films Group, and Alpha Studio Group, the production arm behind such iconic gay brands as Next Door Entertainment, Pride Studios, and Active Duty.
About Gamma Entertainment:
Built in 1996, Gamma Entertainment is an award winning company specializing in multimedia and e-commerce. As an industry leader in web technology, Gamma partners with some of heaviest hitters in the adult production scene such as Evil Angel, Girlfriend Films, Falcon Studios, and more. A solid reputation, strong technical knowledge, and a genuine approach to building relationships are the main principles instilled in Gamma Entertainment.