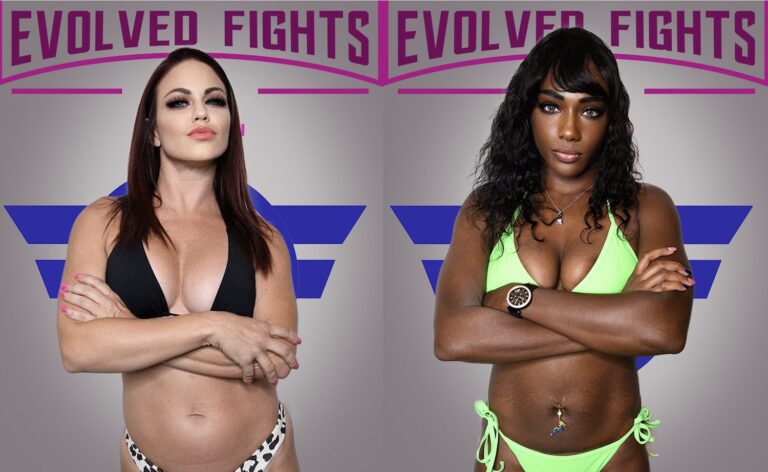 (Las Vegas, NV) Evolved Fights Lez’s Annual Fall Brawl is one of the most talked about and watched events of 2022. They’ve rolled out the last match before the Semi-Finals begin. And Match #4 is quite a matchup and could be one of the most-watched Fall Brawl matches of 2022.

Match #4 of the Fall Brawl is definitely a nail-biter with rookie Paris Love (aka Powerhouse) with two fights under her belt taking on champion fighter Sarah Brooke (aka The Pitbull), who’s won seven out of her eight matches and has a background in the catfight world. Although it would seem Sarah has the upper hand, Paris is one of the best rookies coming up on the site. So who will be the winner and inch closer to the Greatest Sex Fighter of All Time title? You’ll have to watch and see. But here’s a hint…it will seem like they both win with the long hard orgasms they both get. See a preview and the exclusive scene at evolvedfightslez.com/updates/Sarah-Brooke-vs-Paris-Love.html.

Match #4 is the last fight before the Semi Finals begin. To recap Match #1 was Daisy Ducati vs. Agatha Delicious, Match #2 was Belli Rossi vs. Avery Jane, Match #3 was Vanessa Vega vs. Jupiter Jetson. The winner from Matches #1 and #3 will face off and then the winners of Matches #2 and #4 will face off in 2 Semi Finals. The two women who win the Semi Finals will advance to the Finals aka Match #7 and wrestle it out for the Greatest Sex Fighter of All Time title. If you haven’t watched the first three matches, now is the time to catch up.

“This has been one of the most exciting Fall Brawls to date! These ladies have brought their everything to each match, and many have been close up until almost the last second. The rookies have really stood their ground against the more accomplished and champion fighters. I’m seriously impressed with all the ladies’ skill, athleticism, and sex drive,” says Ariel X.

The tournament ends on December 7th. The matches are updated biweekly, and alternate weeks will feature an Orgasm Challenge update.

To interview Ariel X or any of the wrestlers appearing on her sites for your site, publication, or show, contact Erika Icon of The Rub PR at erika@therubpr.com.