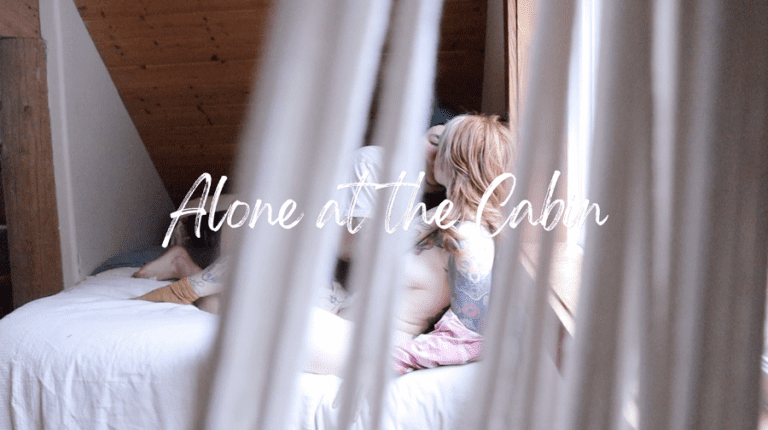 Share
Facebook Twitter LinkedIn Pinterest Email
(Los Angeles, CA / January 20, 2023) — Top adult content creator GoAskAlex is offering up a snug retreat to cozy up to in her latest erotic video release with co-star Fiona Mae, “Alone at the Cabin”.
The ten-minute sexy scene – “the perfect length for self-loving,” teases Alex – conjures up fantasies of a private escape away from the world and “guaranteed to keep you toasty warm on the coldest of days!”
After a long stretch of playtime out in the cold with their friends during their restorative winter getaway, these two tattooed performers turn up the heat together back at the cabin. After some initial giggling and flirtation, Alex asks Fiona if she wants to “make oot” and the two break character with peals of laughter as Alex cries, “I said that so Canadianly.”
“Alone at the Cabin” is available exclusively on each of the duo’s OnlyFans platforms – @goaskalex and @heyitsfionamae – and fans can get to know GoAskAlex better at GoAskAlexOnline.com, Twitter and Instagram.
ABOUT GOASKALEX:
GoAskAlex is an adult model, onscreen performer and sex educator with the distinction of being the industry’s first-ever ostomate since receiving a life-changing surgery in 2019, diverting her small intestine out through her abdomen, necessitating the need to wear a permanent medical device.
The auburn-haired British Columbia, Canada native – who launched her adult career in 2014 as a webcam model and online companion – has since taken the opportunity to use her high-profile platform to advocate for disabled and underrepresented bodies in adult media.
GoAskAlex currently sits atop the 1% of content creators on OnlyFans, is a top attraction over at
SuicideGirls.com and ManyVids as well, selling her original video clips for her many thousands of fans on the popular platforms and amassing nearly 100,000 followers to her ever-growing TikTok page.
She has since been featured in XBIZ Magazine, posing for the cover as the trade publication’s first-ever model with an ostomy, as well as Hustler E-Magazine to promote her inspiring Disabled Sex Workers Calendar. Alex also won 2020’s XBIZ Cam Award for Best Inked Model and 2021’s XBIZ Best Cam Model and has had her writing published by well-known mainstream publications such as VICE.
GoAskAlex occupies the traditional, ancestral and unceded territory of the Squamish Nation, Tsleil-Waututh Nation and Musqueam Nation. To learn more, visit GoAskAlexOnline.com and follow her on Twitter and Instagram.
# # #
Press and media contact:
Brian S. Gross | BSG PR | 818.340.4422 | brian@bsgpr.com |@bsgpr
Alone at the Cabin Fiona Mae GoAskAlex
Share. Facebook Twitter Pinterest LinkedIn Tumblr Email
Previous Article“Real Life” XXX Recaps a Super-Successful AVN Show
Next Article Caitlin Bell Drops New Exclusive Scene with Maximo Garcia on OnlyFans