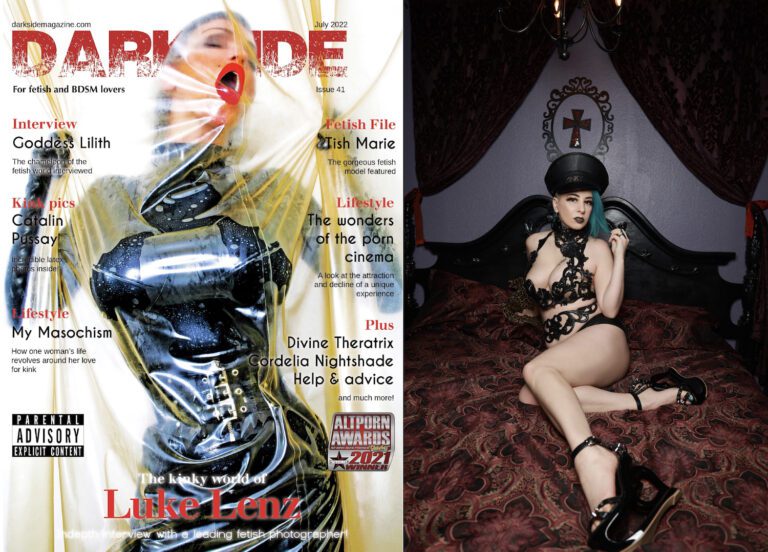 Dubbed “the hottest digital magazine on the planet,” Darkside Magazine has released its latest issue yesterday. Issue 41 is packed with incredible articles and photos, including an eight-page feature with Goddess Lilith. Goddess Lilith’s exclusive eight-page exclusive interview and pictorial is a definite must-read for Her worldwide fans and subs. Starting on Page 18 and running through Page 27, “Goddess Lilith Chameleon of the Fetish World” discusses in-depth her award-winning e-book and upcoming titles, being a Kink Educator and mentor, EXALTED events and 4th-anniversary celebration, winning Best Fetish Cam Model at the XBIZ Cam Awards, going exclusive with LoyalFans, Her band Sorrowseed embarking on a world tour, gaming on Twitch, and much more. Mordred Lafey took brand-new stunning photos of Goddess Lilith, and She’s modeling high-end fetish couture from Liquid Red. In addition to Her feature, Goddess Lilith is mentioned on the cover and in the editor’s note from Paul Donnelly.

“I’m really pleased with My Darkside feature and hope it increases My worldwide fanbase, educating and mentoring opportunities, and attendance at Sorrowseed world tour shows. It’s a great way to catch up with everything I have going on and what’s coming up in 2022 and beyond,” says Goddess Lilith.

To read “Goddess Lilith Chameleon of the Fetish World” and the July 2022 issue of Darkside Magazine, go to viewer.joomag.com/darkside-issue-41/0917866001656171580?short& and click on “Full Version” button to subscribe. Digital subscription options are one year for $25.99 or 3 months for $7.99, and your subscription gives you access to current and all back issues.

Interview Goddess Lilith for your site, publication, or show by contacting Erika Icon of The Rub PR at [email protected].