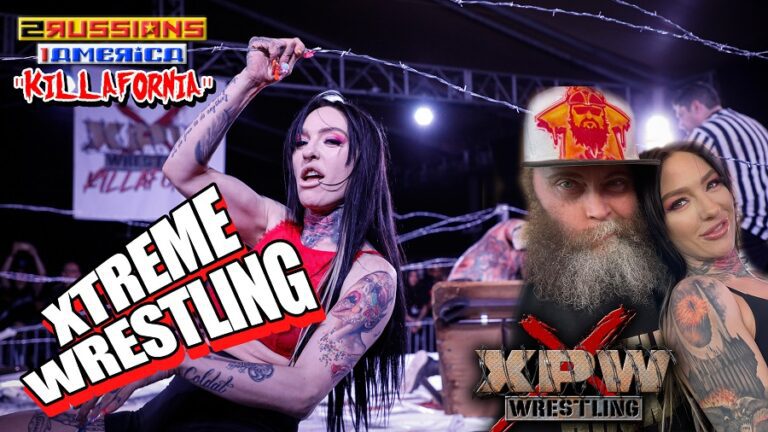 Share
Facebook Twitter LinkedIn Pinterest Email
(Los Angeles, CA / July 22, 2022) — Adult industry power couple Ivan and Misha Montana are inviting fans to join them for a wild ride of open-minded discussions about absolutely anything and everything with the launch of their new Eccentric Reality YouTube channel and video series, “2 Russians, 1 America”, available for viewing now at 2Russians1America.com.
The dynamic duo kicks off the new series with an engaging off-the-cuff summary of their recent experience at XPW’s ‘Killafornia’ Deathmatch Tournament in Southern California, including their official arrival at 2pm and conclusion at 2am – a nonstop buzz of seeing old & new friends, Montana’s official introduction to XPW’s Kat Martini and Rob Black, the notorious founder of Extreme Associates.

The two share stories and clips from the high-energy event, as well as Ivan’s tales from working at Extreme with his former boss Black. What did Montana say to Black to make him nervously smile? How was Ivan’s reunion with Black after not seeing each other for more than 18 years? How injured did Misha get from the Deathmatch and why was she covered in blood and glass?

“I was actually nervous to see Rob after all these years, and you can hear it in my voice when I see him – it’s funny how Misha wanted to meet Kat and Rob and was all giddy about it,” recounted Ivan of the 12-hour excursion.

“This was the first time that I had ever shot photos at a wrestling event backstage and ringside, let alone a Deathmatch tournament, so this episode really highlights what the entire group of wrestlers and backstage workers go through… it’s very enlightening and entertaining.”

Montana added, “I can’t believe the 18 months we have had, and now it’s time to share all the funny, scary, and super dramatic moments with the world. What we have sacrificed and experienced in creating this will be a part of our journey… plus, you’ll get to meet our entire eccentric world!”

Ivan adds that he and Montana are currently on the lookout for individuals and businesses that may want to become involved with SliVanTV and “2 Russians, 1 America” YouTube series as official sponsors, and interested parties can contact him at [email protected] and 323.397.5856.

To learn more, visit 2Russians1America.com, and find & follow Ivan and Misha at:

Raven-haired (but blonde for now!), pale-skinned and covered in tattoos, Misha Montana (aka Xeno Kitty) represents the ideal model of the Millennium. The Nevada native of Russian descent is not only one of the adult industry’s fastest-rising performers, she is also the Chief Brand Officer, Production Manager and in-house director for Alt Erotic, an award-winning alternative lifestyle adult film brand.
From her Xenomorph face-hugger alien tattoo on her pussy that was documented in an AltErotic scene to making adult and mainstream headlines in 2021 for her stroke and getting engaged to her partner in crime, Ivan, on the red carpet during the AltPorn Awards, Misha consistently makes history as a creative artist on the rise.
The exotic beauty started adult modeling ten years ago, but launched her adult film career full-time in 2020, with spirited performances for AltErotic.com and other high-profile studios. She also co-hosts YouTube videos with Ivan on the Slivan TV channel, as well as their “2 Russians, 1 America” podcast.
# # #
Press and media contact:
Brian S. Gross | BSG PR | 818.340.4422 | [email protected] | @bsgpr
Ivan Misha Montana
Share. Facebook Twitter Pinterest LinkedIn Tumblr Email
Previous ArticleMYLF Sets Sail on a Sea of All-New Scenes to Indulge In!
Next Article Disruptive Films Lets Out the Ferocious Beast in “Feral and Wild”