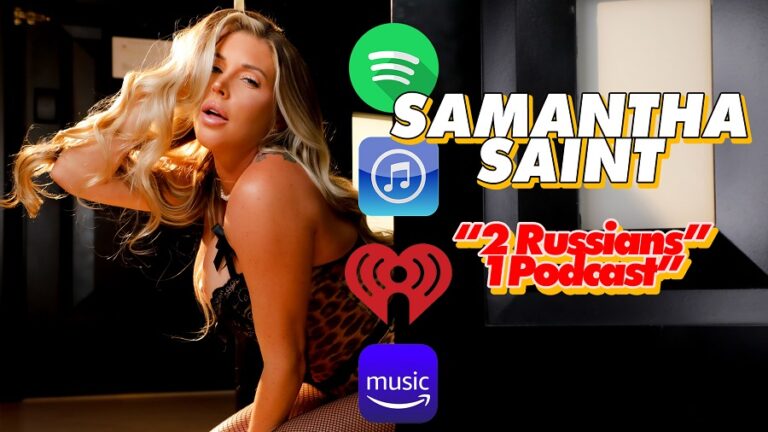 Share
Facebook Twitter LinkedIn Pinterest Email
(Los Angeles, CA / December 22, 2022) — Ivan welcomes an adult legend to his 2 Russians 1 Podcast (2Russians1Podcast.com) when busty blonde bombshell Samantha Saint pays a visit to the show!
The duo, who has known each other almost a dozen years when Saint entered the adult film industry in 2010 and has been traveling around the U.S. together on nearly 20 documented trips, discuss their many (mis)adventures on the road and personal explorations over the years.

“What an honor to have the incomparable Samantha Saint with me on the podcast to discuss her life and achievements as a Wicked contract star, content creator as an OnlyFans star and longtime PUBA talent, and going viral back in the day as a ‘Naked Tebowing Girl’, which resulted in an apparel deal from T.I.T.S.,” said Ivan of the veteran performer.

“This is part one of many episodes to come with the stunning Miss Saint, so fans can look forward to digging in to even more personal anecdotes in future episodes with her. Come join the show and see where the ride takes us!”

Saint added, “I love any opportunity I can get to catch up with Ivan; no matter how much time has passed, we just pick up right where we left off. He’s been a great friend of mine for over 10 years now. Meeting him early on in my adult career, we have so many stories to share. One hour was not enough time so I’ll be back for part 2 and maybe even a part 3.”

Ivan is currently on the lookout for individuals and businesses that may want to become involved with SliVanTV and the 2 Russians, 1 Podcast as interview guests and official sponsors, and other media opportunities for Ivan. “I’m open to share 20 years of stories on other podcasts as well!”

2Russians1Podcast.com can be found on Apple Podcasts, Spotify, iHeart and other quality streaming platforms.

While reveling in his success as a filmmaker, media personality, entrepreneur and podcast host, the past few years have also seen him become involved with the XPW (Xtreme Pro Wrestling) organization in Southern California, and take on a surprise diabetes diagnosis that affected his ability to walk and work.

Between the extensive healing process, adopting a healthier lifestyle and developing new creative projects, “What I learned during this experience is how important it is to listen to your body. Many of us have this ‘I got this!’ mentality, but truthfully, we don’t. It’s a serious reminder to stop and do a wellness check on ourselves physically, mentally, business-wise and how we treat others. We hustle and bustle and just run with no breaks, but we need those breaks… they are crucial.” To learn more about Ivan, visit IamIvan.com or follow him on Twitter @IamIvanXXX.