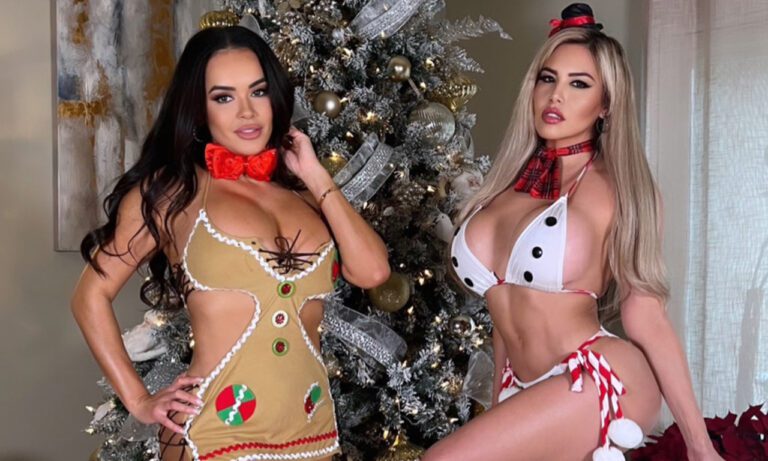 Share
Facebook Twitter LinkedIn Pinterest Email
(LOS ANGELES, Calif. / December 22, 2022) — Multi-nominated adult film star Caitlin Bell is celebrating the season of giving with the release of an exclusive Xmas-themed scene that teams her with Hall of Fame performer Daisy Marie.
“Merry Christmas you filthy animals,” Bell roared. “Tis the season to really enjoy yourself, and boy have I! Being on the naughty list is what I strived for this year and Santa delivered!!
“Watch the infamous and absolutely gorgeous Daisy Marie and I show Santa that Latinas do it best! Enjoy as Frosty (little old me), and Daisy, the most delicious cookie with a fire cookie (a.k.a. vagina), melt — and send Santa’s blood sugar through the roof!

“I am fortunate to have a wonderful community on OnlyFans and, to share the joy of the holidays, I want you all to be a part of it!  Happy holidays; your penis will thank us!”

The racy clip releases Christmas Day on Bell’s OnlyFans. Subscribe here ( https://onlyfans.com/caitlinisnaughty ) and get yourself on the naughty list today!
Bell is now running a limited-time offer: 50% off her OnlyFans for 31 days!  Offer ends Jan 1, 2023!
Find Daisy Marie on Twitter: @realdaisymarie.
Bell is currently nominated for Best Sex Scene — All-Girl, and Best Sex Scene — Vignette, in the 2023 XBIZ Awards, The 21st annual XBIZ Awards gala is set for Sunday, Jan. 15, 2023 at the historic Hollywood Palladium, and will serve as the capstone event to “XBIZ week” and X3 Expo.
For more information, follow XBIZ on Twitter: @XBIZ.
Also check out Bell’s September 2022 NightMoves Magazine “Entertainer Spotlight” profile here: https://issuu.com/nightmoves/docs/nm_finalpg_1-_80_sept_2022_website/74.
She is represented by AMA Modeling / @TeamBrian2016 for East Coast shoots, and 101 Modeling / @101ModelingInc for West Coast shoots.
For feature dance appearances, Caitlin Bell may be booked through  The Lee Network @LeeNetworkNV, the premier agency for feature entertainers throughout North America.
Keep up with the captivating Caitlin Bell at her her official website CaitlinBellVIP.com, her new Twitter account: @LatinaBellxoxo, and on Instagram: @officialcaitlinbell.
Find exclusive Caitlin Bell goodies for sale at CaitlinBellMerch.com.
About Caitlin Bell:
Of Spanish, Mexican and Native American descent, Caitlin Bell hails from Las Cruces, New Mexico, just across the border from Juarez, Mexico. She studied Human Nutrition and Food Science at New Mexico State University until a visit to Atlanta, Georgia led to an offer to work as a promo model and brand representative for a tequila company.
Bell spent a year traveling to every Spring Break party spot in the U.S., and then settled in Atlanta. After a five-year engagement requiring a stay-at-home suburban lifestyle, the untamable Bell decided to break free — literally — by sneaking out in the middle of the night.
After a two-month flirtation with exotic dancing, Bell decided to celebrate her newly-recovered freedom by traveling the world, with visits to Argentina, Costa Rica, Mexico, Great Britain, France, The Netherlands, and Thailand.
A brown-eyed blonde with a staggering 36D-26-36 figure, in June 2021 her sizzling social media photos caught the eye of a talent recruiter. While visiting Florida, Bell signed on with an adult talent agency, and made her adult movie debut for HotMILFSFuck opposite beloved performer Jake Adams, who was tragically killed in a freeway collision shortly after their scene was released.
A self-described adrenaline junkie, Bell learned that she is a natural in front of the porno lens, and in a very short time, the bombshell shot for top-tier studios such as Brazzers, Reality Kings, Jules Jordan Video, Nympho, WankzVR, PornPros, SexLikeReal, MYLF, BrattyMilf and Team Skeet.
“I’m having the most fun,” Bell said. “The people in adult are more respectful than I ever imagined. And I thought I would have to use lube, but haven’t had to even once!”
The sexy and sweet Latina’s interests include world travel, red wines, fine cuisine, and attending music festivals, and her motto is: “A dirty mind is a terrible thing to waste.”
“I’m not a 9 to 5 girl,” Bell concluded. “I’m all about pursuing the freedom to be the person you want to be, and to have those incredible experiences.”
Bell was nominated for Hottest Newcomer in the 2022 AVN Awards, and was profiled in the September 2022 issue of NightMoves Magazine.
She is currently nominated for Best Sex Scene — All-Girl, and Best Sex Scene — Vignette in the 2023 XBIZ Awards,
She resides in Las Vegas.
Contact:
Michael Whiteacre
HoneyHouse PR
PR@HoneyHouseXXX.com
775-742-8425
Twitter: @HoneyHousePR
#   #   #
BrattyMilf brazzers Caitlin Bell Daisy Marie Jules Jordan Video MYLF Nympho PornPros Reality Kings SexLikeReal Team Skeet WankzVR XBIZ Awards Xmas
Share. Facebook Twitter Pinterest LinkedIn Tumblr Email
Previous ArticleIvan’s 2 Russians 1 Podcast Chats with Adult Superstar Samantha Saint
Next Article Rocco Siffredi Presents “The Rocco Experience: How To Be A Great Pornstar”