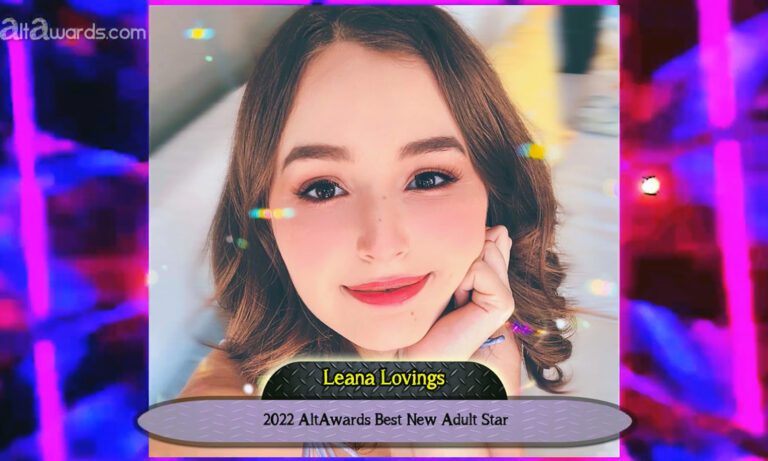 Share
Facebook Twitter LinkedIn Pinterest Email
(LOS ANGELES, Calif. / December 28, 2022) — Leana Lovings is thrilled to have been named Best New Adult Star in the 2022 Alternative Media Awards, also known as the AltAwards.
This latest win for the popular star was announced on Tuesday night’s awards show livestream, during which Lovings accepted her award via video whilst visiting family for the Holidays.

“It is an extremely wonderful honor, and I am very grateful to have been awarded 2022 Best New Adult Star in the Alternative Media Awards.”

Lovings debuted in adult films in September 2021 and has forged a path towards adult industry superstardom during the brief interval since then: the all-natural dreamgirl-next-door is currently nominated for two 2023 AVN Awards, including the coveted Best New Starlet prize, two 2023 XBIZ Awards, including Best New Performer, and an AVN Fan Voting award for Hottest Newcomer.
“We at the Alternative Media Awards are pleased to be presenting Leana Lovings with the 2022 Best New Adult Star title,” said a rep, who noted that the award “has existed since the AltAwards’ inception in 2012, and was originally won by Lily Carter.”

For more information, follow the Alternative Media Awards on Twitter: @AltAwards.
Connect with Leana Lovings on Twitter: @LeanaLovings and Instagram: @theleanalovings.
Catch the star on Chaturbate and join her Famclub: https://chaturbate.com/naughtynightlover/
Leana Lovings fans are invited to check her out on FreeOnes: https://www.freeones.com/leana-lovings, where she is currently ranked #30 in the world, and peruse her self-produced videos on ManyVids.
Lovings treats admirers to an unparalleled level of access via her OnlyFans account, which is updated daily with images and videos that you can’t see on her public accounts.
Fans are invited to subscribe to Lovings’ verified Pornhub page.
About Leana Lovings
The rise of this versatile cam model turned porn starlet, who debuted in adult films in September 2021, can only be described as meteoric.  Leana Lovings was already an immensely popular webcam performer with over 200,000 followers on Chaturbate before taking the plunge into the World of X.
She has brought her loving fan base with her and, in that short interval, the all-natural, 5-foot brunette beauty has reached the top 0.3% on OnlyFans, the top 30 Most Popular Porn Stars on Adult Empire, and ascended to the top 20 adult stars on Pornhub, with over 139 million views on that platform alone.
Lovings grew up in the rural southeast, and attended university with double major in Biology and Psychology and a specialization in Neuroscience.  Camming represented “a way to explore my sexuality in a safe way, while creating something that feels like a very intimate and even comforting experience for the viewer,” Lovings said.
Having been raised in a religious environment, Lovings said that “sex work healed me in a lot of ways. It taught me how to care more for myself — exercise, self care — and how to have more confidence in myself.”
Lovings’ authenticity, girl-next-door looks, dynamic sexuality and irresistible personality have repeatedly sent her videos into the best seller charts, landed her on magazine covers for The Score Group’s iconic “18 Eighteen”, and Hustler’s “Barely Legal”, and led to a profile in British tabloid, the Daily Star.
In May, Lovings served as trophy girl at the adult industry’s X-Rated Critics Organization (XRCO) Awards in Hollywood, and was a featured speaker on two panels at the YNOT Summit. The young star was crowned Nubiles Flavor of the Month in August 2022, Team Skeet All-Star in October, Nubiles Fantasy of the Month in December, and honored as Adult Empire’s Pornstar of the Year that same month.
She was nominated for Cam Model of the Year in the 2022 Fleshbot Awards, and is currently nominated for two 2023 AVN Awards, including the coveted Best New Starlet prize, two 2023 XBIZ Awards, including Best New Performer, and an AVN Fan Voting award for Hottest Newcomer.
Read her Entertainer Spotlight interview in the November 2022 issue of NightMoves Magazine here.
She resides in South Florida.
Contact:
Michael Whiteacre
HoneyHouse PR
PR@HoneyHouseXXX.com
775-742-8425
Twitter: @HoneyHousePR
#   #   #
2022 Alternative Media Awards Alternative Media Awards Best New Adult Star Leana Lovings XBIZ Awards
Share. Facebook Twitter Pinterest LinkedIn Tumblr Email
Previous ArticleSouthern Belle Dixie Lynn Brings Another 5-Star Scene to Dick Drainers
Next Article Oliver Wong Gets in One More Live Comedy Show for 2022 on Friday Night