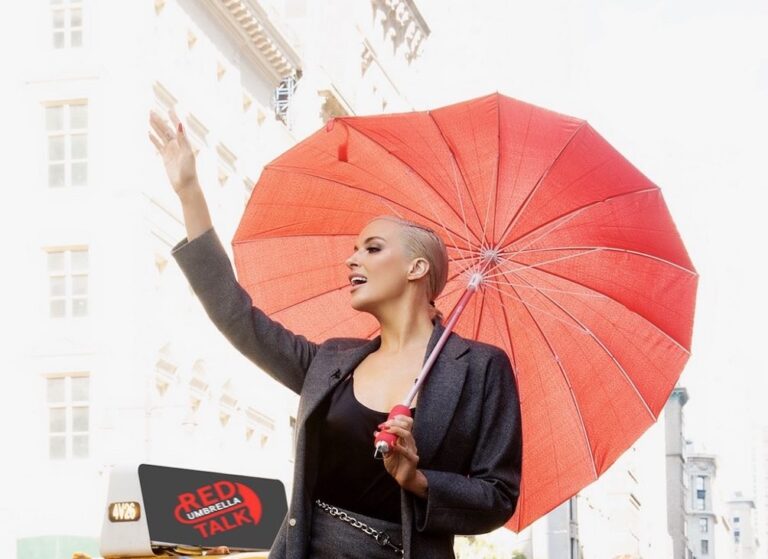 (New York, NY) The Red Umbrella Talk Podcast is a unique five-part series from two legends: producer and host of Naked News and CAM4’s A Mouthful with Laura + Romi Podcast, Laura Desiree, and world-renowned photographer for Hustler Magazine and StaggStreet.com, Ellen Stagg. In conjunction with CAM4 and MotorBunny, the series debuted earlier this month. The premiere episode features adult film performers Romi Rain and Lotus Lain, and they answer questions about the industry submitted by the general public.

The Red Umbrella Talk Podcast took its name from the global symbol for sex worker rights. Shot on location at the infamous Museum of Sex in New York City, the groundbreaking series is hosted, written, and produced by journalist Laura Desiree and directed and produced by photographer Ellen Stagg. The five-part series answers questions about sex work from the general public. Guests include adult performers, strippers, escorts, Dommes, and legal experts.

The podcast seeks to open the discussion on sex work with actual sex workers in a necessary, stereotype-busting conversation. There are many opinions on sex work out there, and the public submitted to Red Umbrella Talk to be discussed over five episodes. Laura Desiree hopes to destigmatize the profession, humanize those in it, and bring clarity to a discourse that has too long relied on damaging misinformation.

Watch “Episode 1: Adult Film Industry with Romi Rain and Lotus Lain at redumbrellatalk.com. See the first two episodes of Red Umbrella Talk on Laura Desiree’s YouTube Channel tinyurl.com/yc6wr67b. Subscribe and look for the final three episodes to be released weekly. Get a sneak peek of the entire season at youtube.com/watch?v=r-Mnn8HUYYY.

“Since our first episode debuted on August 4th, the response has been phenomenal. After interviewing and interacting with so many sex workers over the years, I felt their voices needed to be heard. This was an incredible experience making the series, and I hope it will open a lot of people’s eyes to what it’s really like to be a sex worker,” says Laura Desiree. “Although the five-part series has already been filmed, we’re looking at the bigger picture and want this to be a series on a major network or cable channel to reach an even wider global audience.”

Credentialed press may view all five episodes, get clips, watch sizzle reels, and view photos. To get access and request a log-in and password, email [email protected]. To interview Laura Desiree or Ellen Stagg for your site, publication, or show, contact Erika Icon of The Rub PR at [email protected].

Inspired by the universal symbol for sex worker rights, the red umbrella, the Red Umbrella Talk Podcast is a five-part series written and produced by journalist Laura Desiree and directed and produced by legendary photographer Ellen Stagg. Guests include adult performers, strippers, escorts, Dommes, and legal experts who answer sex work questions from the general public. Backed by CAM4 and MotorBunny, the series debuted on August 4th, 2022, with adult film performers Romi Rain and Lotus Lain as guests. A new episode drops weekly until all five are available. Watch the series on Laura Desiree’s YouTube Channel youtube.com/channel/UC9nLZfHoARMV9ldYrJhG0Dg. And watch the extended trailer of the entire season at youtube.com/watch?v=r-Mnn8HUYYY. Follow Red Umbrella Talk on Instagram at @redumbrella.talk.