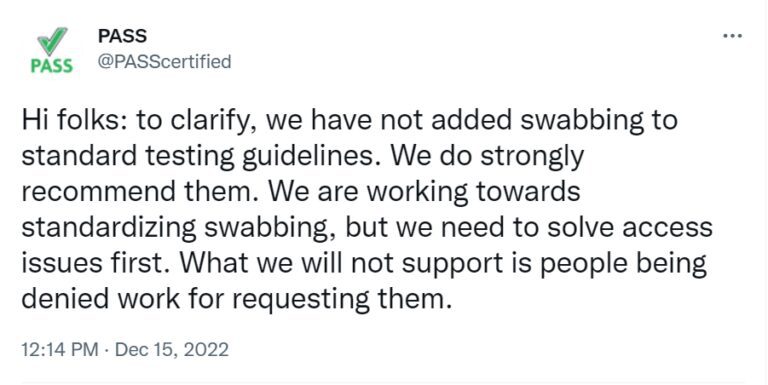 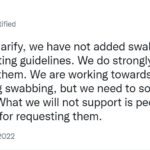 The proposed industry-wide swabbing requirements without cost subsidization will gatekeep work from survival and marginalized sex workers. As a trans woman and sex worker of two years, I can only speak for my own experiences and for the experiences of my community and so that’s what I will be doing with this… whatever this is. My community stands to be the most affected by the proposed changes to the STI testing “Gold Standard” panel (GSP).

Trans individuals (femmes predominantly) are disproportionately represented in the sex industry. The 2015 United States Trans Survey – which is the most recent – found that 20% or 1 in 5 trans individuals have turned to, what they call, the underground economy in order to survive – with even higher rates for women of color. The same survey reported that 30% of trans individuals have experienced homelessness in their life. Trans people are more likely to be considered survival sex workers in America. Considering the data from both results, you start to see how trans sex workers are far more likely to be at risk than our cisgender counterparts.

In Las Vegas, I use Talent Testing (TTS) for my “Gold Standard” panel tests. Just the GSP costs $155 by itself. There are high risk performers who wish to request covid-19 testing to keep themselves safe – totally within their rights, by the way – but that adds another $35. Now, a vocal crowd of performers are calling for swab testing to be added. TTS is asking an additional $120 for that test. So, added together, if I wished to do my part and keep the performer pool safe, I am paying TTS $275 for the GSP + swabs or $310 for the GSP + swabs + covid testing for a 14-day window to perform in. Testing back-to-back to keep myself always available would mean roughly $600 every month just for the opportunity to work.

Because of the lack of proper studio interest and opportunity, trans creators often settle for content collabs to be shared and sold on respective clip stores. Many sex workers engage in this type of content trade transaction but trans creators are about to be shut out of the larger industry by one prevailing sentiment: “NO SWAB, NO JOB”. I absolutely cannot and will not shame anyone for requiring that their scene partner have a swab test to prove they are clear of the current strains going around. However, it needs to be pointed out that just because you film with, say, me that you will be completely safe. I do not feel comfortable requiring swabs for my trans siblings because of cost and accessibility. I, and many others, will be accepting tests just like we always have. As a trans performer, I don’t have the luxury of being so exclusive with my work selections. My fear is that once this is realized, the cis performer community will begin another “crossover” performer witch hunt and smear campaign for those willing to perform with marginalized communities who may not have access or funds to get swab testing. I fear that trans performers will be left with even fewer opportunities and will pushed into even riskier situations just to survive.

Once upon a time, there was a performer subsidiary fund that the production companies paid into which would help cover the cost of testing for those who stayed tested or, at least, tested often enough to qualify for a payout. This fund is in serious disuse and it is being said that production companies are no longer supporting it. This exact solution, already implemented and built up, could be what ensures EVERYONE gets the safety we deserve while working together. Cost subsidization for survival and marginalized performers helps ensure that industry standards are being followed and enforced to a reasonable enough degree as to keep us all safe.

Production companies, please talk to your PASS and FSC contacts. Big name performers with funds and fame to spare, please do not forget those less fortunate than you. Consider reaching out and offering a bit of funding yourself. Also, please do not be too hasty in suggesting solutions that do not include everyone. Please remember the marginalized communities that many of you often support in other ways.

The 2015 U.S. Trans Survey results can be found at: https://www.ustranssurvey.org/reports and are the most recent results released. The 2022 survey results have yet to be released as polling has only just ended.