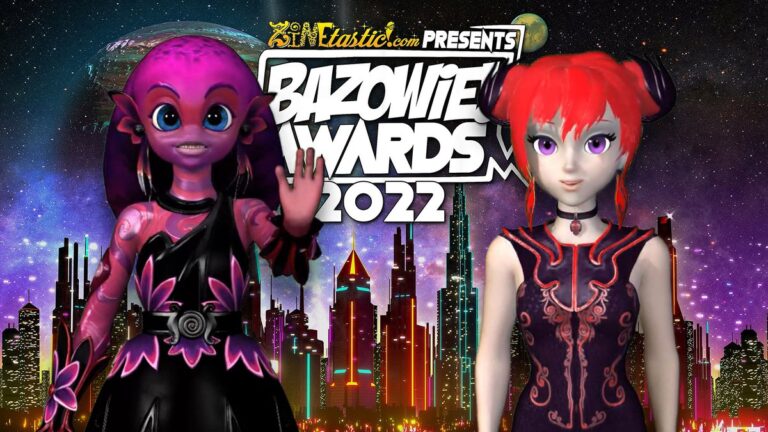 Celebrating creativity in cosplay and all things science fiction and fantasy fandom, the first-ever Bazowie! Awards recently posted a video ceremony to reveal the winners of the 2022 Bazowie! Awards. The 22-minute video was hosted by animated hosts Kate Redmane and Lily Octolien. Many awards were given out, but the last few awards are what made Marica Hase and Buusan over the moon. They won two awards for Quirkiest Accomplishment and Best Human/Adorable Critter Collaboration. They won by asking fans and industry friends to vote, along with the Bazowie! panel picking their favorites. Marica and Buusan will be watching their mail for their spaceship crystal ball trophies.

“Wow! Thank you to everyone who voted for us and of course, the Bazowie! Awards. We’re honored to receive not one but two awards. Buusan and I work very hard on our social media and YouTube Channel, and we’re glad our fans around the world are enjoying it. I just hope this won’t go to Buusan’s head; he’s already pig-headed,” says Marica Hase smiling and laughing.

Watch the awards ceremony in replay a sexyfandom.com/archives/2022/05/bazowie-awards.

Get Marica on your set by contacting Mark Spiegler at mark@spieglergirls.com or 818.326.5403. Book her for feature dancing through A-List alistfeatures.com and Centerfolds Strips centerfoldstrips.com.

To interview Marica Hase for your site, publication, or show, contact Erika Icon of The Rub PR at erika@therubpr.com.