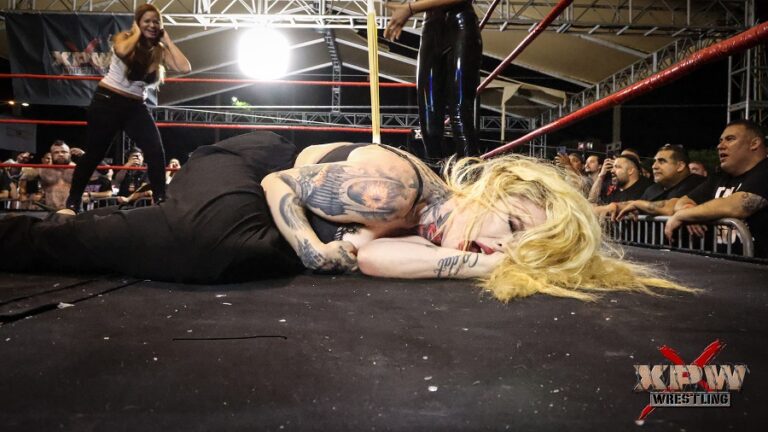 Share
Facebook Twitter LinkedIn Pinterest Email
(Los Angeles, CA / August 29, 2022) — Misha Montana got into a WILD altercation with adult film stars Veronica Caine and Jasmin St. Claire as part of Xtreme Pro Wrestling (XPW)’s ‘Night of Reckoning’ live event, available exclusively at FITE.TV PPV Replay.
Montana is the valet/manager for XPW’s ‘King of the Deathmatch’ Champion Shlak, who is being aggressively recruited by Caine and St. Claire in order to create their own stable of wrestlers. This has led to physical confrontations the last two shows, with this second one resulting in heated slapping between Montana and Caine.
The attack intensifies as St. Claire gets in her shots with a Kendo Stick, leaving bloody welts and bruises all over Montana’s back and shoulder. She was eventually helped to the back by XPW officials, but now vows on revenge coming up at the next XPW show. Montana will be looking for bloody revenge at the upcoming event, “Halloween in Hell #3”.

“I can’t believe Veronica and Jasmine took it that far in attacking me at the XPW show; I knew we would have a physical altercation eventually but Jasmine took it too far with the Kendo stick,” said Montana.

“I had bruises, welts and cuts for a week. She blindsided me this time but next time they won’t be so lucky! I want blood in October so get your tickets it’s going to be the most insane show yet and I promise I’ll be getting my revenge.”

Montana and her partner-in-crime Ivan will be posting the attack on their official YouTube channel www.2Russians1America.com.

To find out more about Xtreme Pro Wrestling and its live events, visit TheXPWWrestling.com and XPWonline.com.

Get to know Misha Montana at:
MishaMontana.com
@TheMishaMontana (Twitter)
@TheMishaMontana (Instagram)
Tiktok.com/@themishamontana
OnlyFans.com/mishamontana
Allmylinks.com/mishamontana
ABOUT MISHA MONTANA
Raven-haired (but blonde for now!), pale-skinned and covered in tattoos, Misha Montana (aka Xeno Kitty) represents the ideal model of the Millennium. The Nevada native of Russian descent is not only one of the adult industry’s fastest-rising performers, she is also the Chief Brand Officer, Production Manager and in-house director for Alt Erotic, an award-winning alternative lifestyle adult film brand.
From her Xenomorph face-hugger alien tattoo on her pussy that was documented in an AltErotic scene to making adult and mainstream headlines in 2021 for her stroke and getting engaged to her partner in crime, Ivan, on the red carpet during the AltPorn Awards, Misha consistently makes history as a creative artist on the rise.
The exotic beauty started adult modeling ten years ago, but launched her adult film career full-time in 2020, with spirited performances for AltErotic.com and other high-profile studios. She also co-hosts YouTube videos with Ivan on the Slivan TV channel, as well as their “2 Russians, 1 America” podcast.
# # #
Press and media contact:
Brian S. Gross | BSG PR | 818.340.4422 | [email protected] | @bsgpr
Jasmin St. Claire Misha Montana Veronica Caine Xtreme Pro Wrestling
Share. Facebook Twitter Pinterest LinkedIn Tumblr Email
Previous ArticleMyGirlCrush Founder Ainslee Says ‘Throw Away the Rule Book’ on Post-Pandemic Fashion
Next Article Cate Osborn, aka Catieosaurus, to Attend, Speak at Dragon Con 2022