Share
Facebook Twitter LinkedIn Pinterest Email
(Hollywood, CA) Multi-award-winning French Canadian adult director and writer Ricky Greenwood is prominently listed on the cover and has a four-page feature in Issue #19 of AltStar Magazine, out now and available in digital format.
Ricky Greenwood’s exclusive interview with AltStar Magazine was released this week. His four-page interview features a photo of him and the cover of “The Bargain”, which won Best AltPorn Feature Video at the 2022 AltPorn Awards and Best Ruining Christmas from the Bazowie! Awards. Written by Artic Phoenix, the piece discusses how “The Bargain” mixes horror and porn and was self-funded, how the film raised funds for The Sidewalk Project, how he handles critiques of his work, working in many different genres as a director, challenges as a director, favorite talents to work with, what makes good adult entertainment, and more. Ricky’s feature starts on Page 12 and ends on Page 15. 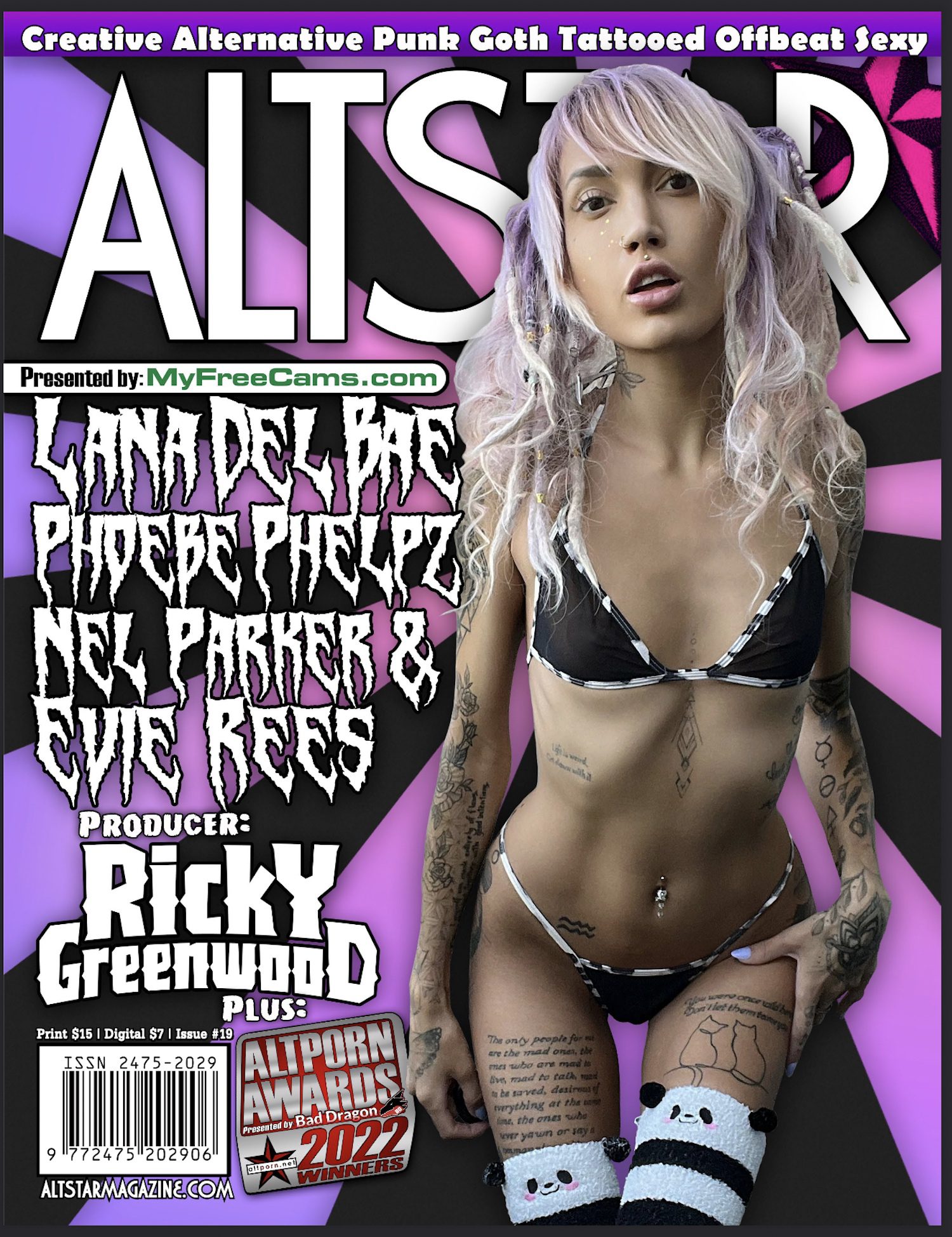 “I was honored to win at the AltPorn Awards and Bazowie! Award, but I was extremely happy to be featured in their flagship publication, AltStar Magazine. The cool thing is that my work will reach a new audience, and that’s very exciting for me,” says Ricky Greenwood.
Get a free digital download courtesy of MyFreeCams of Issue #19 of AltStar Magazine at Zinetastic zinetastic.com/cart/?add-to-cart=2650&coupon=alt19.
To interview Ricky Greenwood for your site, publication, or show, contact Erika Icon of The Rub PR at erika@therubpr.com.
ABOUT RICKY GREENWOOD
In 2017, French Canadian adult director and writer Ricky Greenwood started in the industry with a push from Mile High Media Vice President John Blitt, who has always been a genius when it comes to spotting true talent. Ricky came from a mainstream background working in television, reality TV, documentaries, feature films, and shorts—all this prepared him to take over the adult industry in the last four years.
The multi-award-winning director and writer is known for his story-driven feature films, like Confessions of a Sinful Nun 2: The Rise of Sister Mona, Terror Camp, Talk Derby to Me, and Killer on the Loose. Over the past three years, he’s become known as a multi-faceted director that works in the straight, gay, trans, and lesbian realms, and has worked with top-shelf studios like Sweetheart Video, TransSensual, Icon Male, Marc Dorcel, Adult Time, AllHerLuv, and MissaX. Ricky has won multiple XBIZ Awards for All-Girl Movie of the Year, Best Editing, and Director of the Year — Trans three times, Director of the Year from the AVN Awards and Best Lesbian Movie or Limited Series, Best Girl/Girl Release from the Urban X Awards, Best Ruining Xmas for Adult Time’s The Bargain from the Bazowie Awards, and Best All-Girl Release Editor’s Choice and Best Feature Production Fans’ Choice from the NightMoves Awards, and “The Bargain” snagged him Best AltPorn Feature Video from the AltPorn Awards and Best Ruining Christmas from the Bazowie! Awards. He’s also received over 300 award nominations for his directing, scenes, art direction, screenplays, cinematography, and editing in all the genres he works in from AVN, XBIZ, TEAs, Fleshbot, NightMoves, XCritic, Urban X, XRCOs, and Inked Awards. In 2021, Ricky was interviewed by Hustler in a piece that captures the iconic director in his element, and again in 2022 in a piece that mixes horror and adult content. He also had a four-page feature in Issue #19 of AltStar Magazine.
Ricky is one of the hardest-working men in adult and loves to give his audiences a glimpse into the projects he’s working on from start to finish in photos on his Twitter @RickyGreenwoodX and Instagram @x_ricky_greenwood_x. You might also see more than a few adult performers you know in his timelines and posts.
adult entertainment altporn awards AltStar Magazine Artic Phoenix Bazowie! Awards best altporn feature video Best Ruining Christmas digital download director exclusive interview feature genres horror MyFreeCams porn ricky greenwood talent the sidewalk project
Share. Facebook Twitter Pinterest LinkedIn Tumblr Email
Previous ArticleIt’s Not Over Until Skye Blue Says It Is in New Deeper Scene
Next Article Florida Seeking to Redefine Sex Censorship Language