I have been told that photo shoots are staged, boring, not reality.  I have always been surprised when my clients seem to be livelier than the norm.  Great vibrant people seldom are predictable and have always been a relief from the norm of boudoir and lingerie that seem to be the cliché’ in the photographic profession.

Free expression has always seemed to be a muddy and gritty way of art.  A way of blast expression that is memorable and never clean.  Enter Catrina and Coda two independents that seem to let lifestyle envelope their ideas of sensuality.  I met both through the Fetlife site, one that specifically caters to those with fetish inclinations.

Years ago, Fetlife was a site staged for those who were representatives for kink and fetish interests only.   As the lifestyles have become more of a hyphenated experience many who would call themselves traditional swingers have added the hyphenated, kink, fetish, poly and nudist tags along with their swinging monikers.  Catrina and Coda are one of these couples.  They seem to slide through lifestyles like disrobing from a silk bath robe.

They chose to initially suspend Catrina, Coda teasing her as she was elevated.  She loved the height and bevel of the rope as he guided himself around her physique. She encouraged his continued arousal during our shoot but never ceased to exact more tension from him.  Later it was her turn to do the same to him and he paid in just the same tension filled way as he had exacted from her.

You know as a photographer that sometimes a party you photograph becomes runaway when the folks you are photographing no longer respond to poses and pose themselves.  You as the witness struggle to keep up with the numbers of images you can capture because of the clients heated cadence.  Motion blur is an artistic error that I try to avoid but when a person interacts with another at a high rate of speed sometime many shots are lost to passion. This was the case with C and C a whirlwind of exotic movement that only a few angles could be captured from!

Once down from the rope they entered the inner studio as evening darkness took the light away. They pitched and heaved on just about every horizontal surface of the studio.  Ropes on the floor, phone to one side books on the other.   I set my studio to shoot in multiple spaces so that one venue to the next is easy.  It’s a pain to clean later!

C and C simply did not stop. They initiated the studio in a way most couples had not.  It was a monumental mess in the end clothing, props, strap-ons, leather, chains and rope were commingled throughout the shoot area.  They were ready to go again, I was the one who was tired.  I have had several notable couples and a few groups explode and be runaways but not in quite a fetish filled way as C and C. 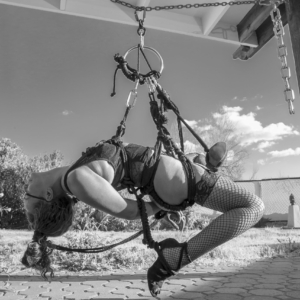 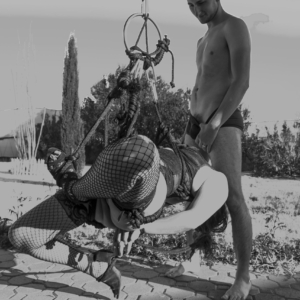 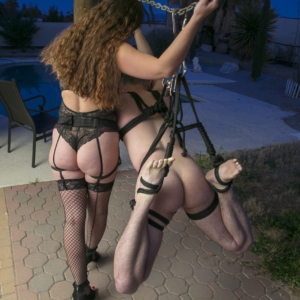 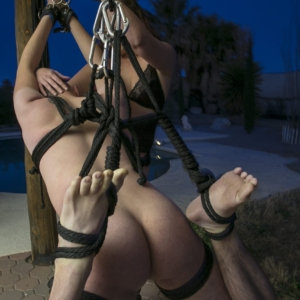