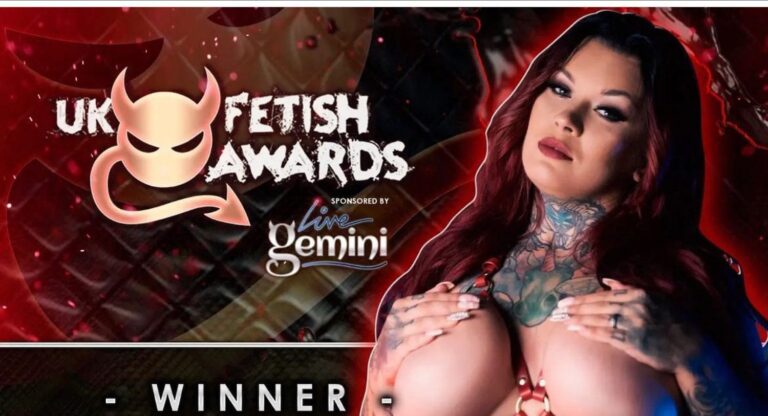 (Barcelona, Spain) Eastern European tatted, busty, red-haired vixen, content creator, fetish model, adult star, and entrepreneur Sabien Demonia won one of the top awards at the UK Fetish Awards, and it was for her camming.

Sabien DeMonia’s GetKinky live shows have helped her to achieve even more worldwide dominance in the cam game, and now it’s helped her win another award. Last Wednesday night, Sabien won the coveted award for Best Webcam Performer at UK Fetish Awards and took home the cartoon devil with a tail trophy. Riri Images and Zara Rose hosted the red-carpet event that celebrates the fetish industry at the Embankment with a who’s who of fetish peeps from around the globe. Although Sabien wasn’t able to personally accept her award, her friends at WarehouseX accepted on her behalf.

“I’m really honored to add this trophy to my collection. This is a great award show, and there’s nothing like it. I was sad that I couldn’t attend but was so grateful my friends at WarehouseX accepted for me. Thank you, UK Fetish Awards, for this!” says Sabien DeMonia.