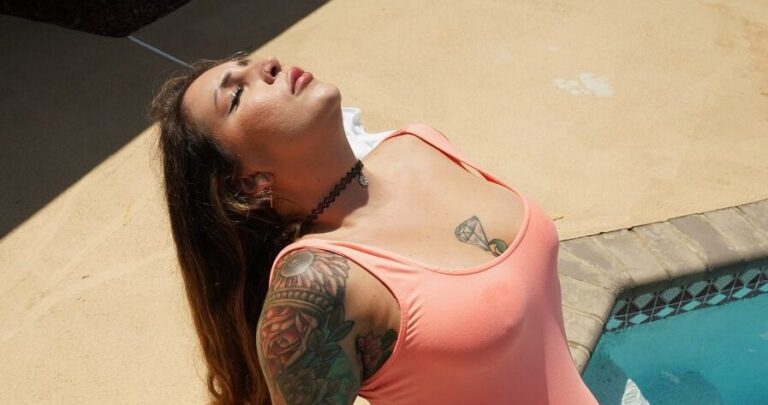 Share
Facebook Twitter LinkedIn Pinterest Email
(Las Vegas, NV / September 26, 2022) — Step House is saying hello to amateur performer Neveah Rose in her first-ever scenes in the adult industry – five of them, to be exact – and she’s ready to share her debut scenes with fans.
The dark-haired, tattooed young talent is busting out with excitement about her newest three-way scenes with Valentina Bellucci and Mad Vince:
“Sexy Stepsisters Team Up on Their Taxi Driver on Spring Break”, a daring three-way scene that takes place out & about on location inside a car that will drive fans WILD
“Two Busty Babes in Amateur Threesome”, a playful scene where Bellucci and Rose exercise their right to enjoy each other’s company with Mad Vince in the bedroom
“Neveah Fucks Her Stepbrother” – a dynamic scene that spotlights a wild taboo romp in the bedroom with no inhibitions
“Fucking My Stepdaughter’s Hot Best Friend in the Morning” is a not-so-sleepy scene that wakes up the senses first thing in the A.M.
“His Girlfriend Caught Him Fucking His Stepmom” – a caught-in-the-act scene that indulges in a family relations surprise that delivers sizzling repercussions
“We’d like to welcome Neveah Rose to the Step House family, where fans can find a true amateur having her way with Vince and I from every amazing angle,” said Bellucci of her newest co-star. “You can’t see her anywhere else but Step House, so come aboard and join us to see what all the excitement is about!”
For more info, find and follow Step House and Valentina Bellucci at:
StepHouseXXX.com
Twitter.com/MrsValentinaXXX
Twitter.com/StepHouseXXX
OnlyFans.com/mrsvalentinaxxx
ValentinaBellucci.manyvids.com
Pornhub.com/pornstar/valentina-bellucci
allmylinks.com/valentinabellucci
xvideos.com/pornstar-channels/valentina_bellucci
ABOUT VALENTINA BELLUCCI:
Italian star-on-the-rise Valentina Bellucci is a bright new talent with an eye on making a name for herself as a respected performer, producer, content creator and studio head for Step House (stephousexxx.com), a brand new erotica imprint and website that highlights the works of adult’s newest amateurs alongside its biggest stars.
Growing up, Bellucci lived in the southern Italian region of Sicily and regularly moved around the U.S. and Europe; she has always considered herself a sexual person who dreamed of one day performing, producing and directing erotica, and gained some early experience as a music video producer while still in Europe before settling permanently in the U.S. – she currently resides in Las Vegas – more than 10 years ago.
In 2020, Bellucci began shooting solo content for adult clip sites as a means of making extra money, and found that she could express herself creatively on her own terms. In early 2021 she started shooting for the industry’s top studios before launching Step House in November.
In her free time Bellucci, an avid fan of the outdoors, can be found in the mountains and deserts of Nevada and California hiking, skiing or off-roading along the winding trails seeking adventure with her two favorite companions, a French bulldog and Cane Corso mastiff.
# # #
Press and media contact:
Brian S. Gross | BSG PR | 818.340.4422 | brian@bsgpr.com | @bsgpr
Neveah Rose New Scenes Step House Valentina Bellucci
Share. Facebook Twitter Pinterest LinkedIn Tumblr Email
Previous ArticleReagan Foxx – From Caged Bird to Free Spirit
Next Article Misha Montana Covers the Fall Issue of Kink Queens Magazine