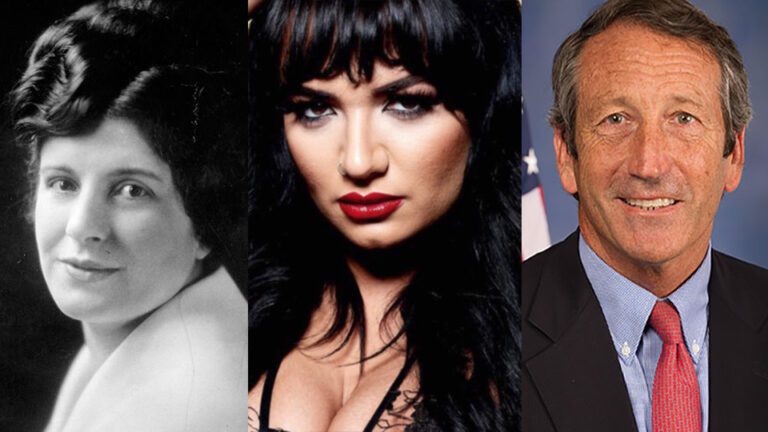 I’m a history buff, and the recent events (see bottom) have led me me ponder two fascinating cases of strange disappearances: those of early 20th century evangelist Aimee Semple McPherson, and early 21st century governor of South Carolina Mark Sanford. Each disappeared mysteriously and was later accused of taking a trip down the old Appalachian Trail (a euphemism born out of Sanford’s case).

Aimee Elizabeth Semple McPherson (née Kennedy; October 9, 1890 – September 27, 1944), also known as Sister Aimee, was a Canadian-American Pentecostal evangelist and media celebrity in the 1920s and 1930s, famous for founding the Foursquare Church. A pioneer in the use of modern media, she used radio to draw on the growing appeal of popular entertainment in North America and incorporated other forms into her weekly sermons at Angelus Temple, one of the first megachurches.

On May 18, 1926, McPherson disappeared from Ocean Park Beach, in Santa Monica, CA. Presuming she had drowned, searchers combed the beach and nearby area, but could not locate her body. Immediately, McPherson sightings occurred around the county, often in widely divergent locations many miles apart on the same day. The Angelus Temple received calls and letters claiming knowledge of McPherson, including demands for ransom. After several weeks of unpromising leads, Mildred Kennedy regarded the messages as hoaxes, believing her daughter dead.

Just as the Angelus Temple was preparing for a service commemorating McPherson’s death, on June 23, Kennedy received a phone call from Douglas, Arizona. Her daughter was alive, resting in a hospital room, and was relating an odd tale to officials.

McPherson stated, at the beach, she had been approached by a couple who wanted her to pray over their sick child. Walking with them to their car, she suddenly was shoved inside. A cloth laced with some type of drug was held against her face, causing her to pass out. Eventually, the revivalist claimed, she was moved to a small shack in the Mexican desert. When her captors were away on errands, McPherson allegedly escaped out a window.

She then traveled through the desert for around 11–13 hours across an estimated distance of 20 miles (32 km) [in the summer heat and without food or water]; and reached Agua Prieta, Sonora, a Mexican border town, at around 1:00 a.m. Collapsing exhausted near a house, the evangelist was brought to adjacent Douglas.

To head off developing rumors that her disappearance was not the result of a kidnapping, McPherson, against the advice of her mother, who thought the press would continue to unfavorably exploit the story, presented her complaint in court.

While various speculations were proffered about the reason for McPherson’s disappearance, the Los Angeles prosecution settled on the contention McPherson ran off with a former employee, Kenneth Ormiston. She was accused of staying with him in a California seaside cottage he rented in a resort town prior to her May 18 disappearance. After leaving the cottage at the end of May, the pair traveled for the next three weeks and remained hidden. Then, around June 22, Ormiston drove McPherson to Mexico, dropping her off 3 miles outside of nearby Agua Prieta, where she walked the remaining distance and presented herself to a resident there.

McPherson maintained all along . . . that she was taken, held captive by kidnappers, and escaped as she originally described. . . .

On November 3, the case was to be moved to jury trial set for mid-January, 1927. If convicted, the counts added up to a maximum prison time of 42 years. However, the prosecution’s case developed serious credibility issues. Witnesses changed their testimonies and evidence often had suspicious origins or was mishandled and lost while in custody. Finally, on January 2, 1927, Ormiston identified another woman as his female companion who stayed with him at the resort town seaside cottage. All charges against McPherson and associated parties were dropped by the court for the lack of evidence on January 10, 1927.

Regardless of the court’s decision, months of unfavorable press reports fixed in much of the public’s mind a certainty of McPherson’s wrongdoing. . . . The Reverend Robert P. Shuler stated, “Perhaps the most serious thing about this whole situation is the seeming loyalty of thousands to this leader in the face of her evident and positively proven guilt.”

H.L. Mencken, noted journalist, satirist, cultural critic, and scholar and an ideological opponent of McPherson, opposite each other in the 1925 Scopes “Monkey” trial, unexpectedly came to McPherson’s defense. He wrote that since many of that town’s residents acquired their ideas “of the true, the good and the beautiful” from the movies and newspapers, “Los Angeles will remember the testimony against her long after it forgets the testimony that cleared her.”

Mark Sanford served as a U.S. Representative for South Carolina’s 1st congressional district from 1995 to 2001. Sanford was then elected Governor of South Carolina from 2003 until 2011.

From June 18 until June 24, 2009, [ ] Sanford’s whereabouts were unknown and there was media coverage of what was described as his disappearance. Subsequently, the Governor reappeared and admitted that he had been in Buenos Aires, Argentina, with a woman with whom he was having an extramarital affair. He stated that in 2001 he met and became friends with this woman and that they started having a sexual relationship in 2008. His wife, Jenny Sanford became aware of the relationship in January 2009, and it was later revealed that two weeks prior to June 24 Sanford and his wife had begun a trial separation. The woman was later identified as Maria Belen Chapur, an Argentine journalist.

The whereabouts of Governor Sanford were unknown to the public, including his wife and his security staff, from June 18 until June 24, 2009. . . . This six day disappearance garnered nationwide news coverage. His state and personal phones were turned off and he did not respond to phone or text messages. That prompted some to believe that he was missing and raised questions about who was acting as governor of South Carolina. His wife, Jenny Sanford, initially stated that she was not concerned and that he needed time away from their children to write something. Sanford has apparently made similar disappearances in the past, although this was the longest. After media speculation grew, Sanford’s office on June 22 stated that he told them where he was going before he left and that he would be “difficult to reach.” Later that day, Sanford’s spokesman, Joel Sawyer, told the press that Sanford was hiking the Appalachian Trail.

Some South Carolina politicians voiced concerns about the governor’s behavior. Lieutenant Governor Andr? Bauer announced that he could not “take lightly that his staff has not had communication with him for more than four days, and that no one, including his own family, knows his whereabouts.” The Senate Minority Leader, Democrat John Land, also questioned the fact that Sanford was absent over the Father’s Day weekend, arguing that “it’s one thing for the boys to go off by themselves, but on Father’s Day to leave your family behind? That’s erratic.”

On June 23, spokesman Sawyer reported that Sanford had contacted his staff that morning—after apparently being out of touch with them for five days—and expressed surprise at all of the attention to his absence. Sawyer announced that the governor planned to return to work the next day.

On the morning of June 24, Sanford arrived at Hartsfield–Jackson Atlanta International Airport, on a flight from Buenos Aires, Argentina. He was met at the airport by only one reporter, The State‘s Gina Smith, who had received a tip that the governor was in Argentina and, on a “hunch”, went to the Atlanta Airport to meet a flight arriving from Argentina. He gave her a brief sit-down interview, wherein he claimed that he was alone for the entire trip, and did not give any details other than that he drove the coastline. Sanford said that he had considered hiking the Appalachian Trail, but at the last minute decided to do something “exotic”. . . .

Several hours after arriving back in the United States, Sanford held a press conference, where he admitted that he had been unfaithful to his wife. . . .

Sanford acknowledged secretly meeting Chapur five times in 2009, including two multi-night stays, one in New York City and one in the Hamptons, paying expenses in cash to avoid detection. Sanford also said that he “crossed the lines” with a handful of other women during 20 years of marriage, but not as far as he did with his mistress. “There were a handful of instances wherein I crossed the lines I shouldn’t have crossed as a married man, but never crossed the ultimate line,” he said. 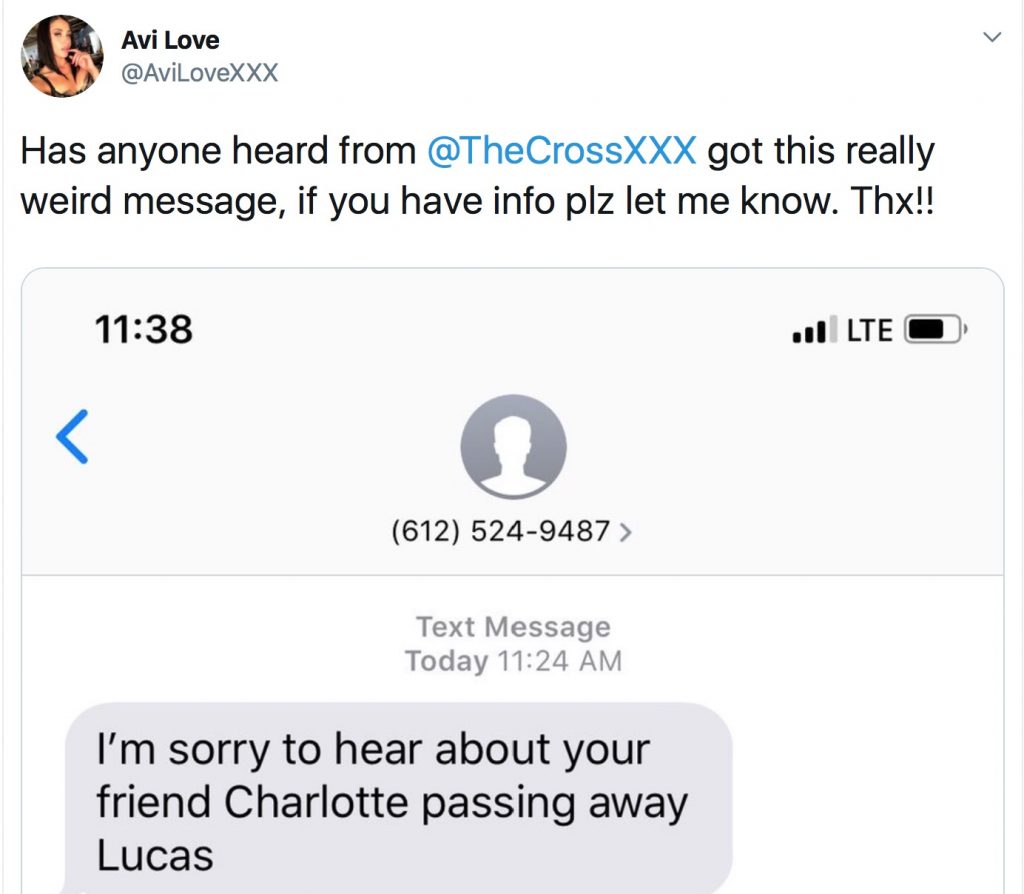 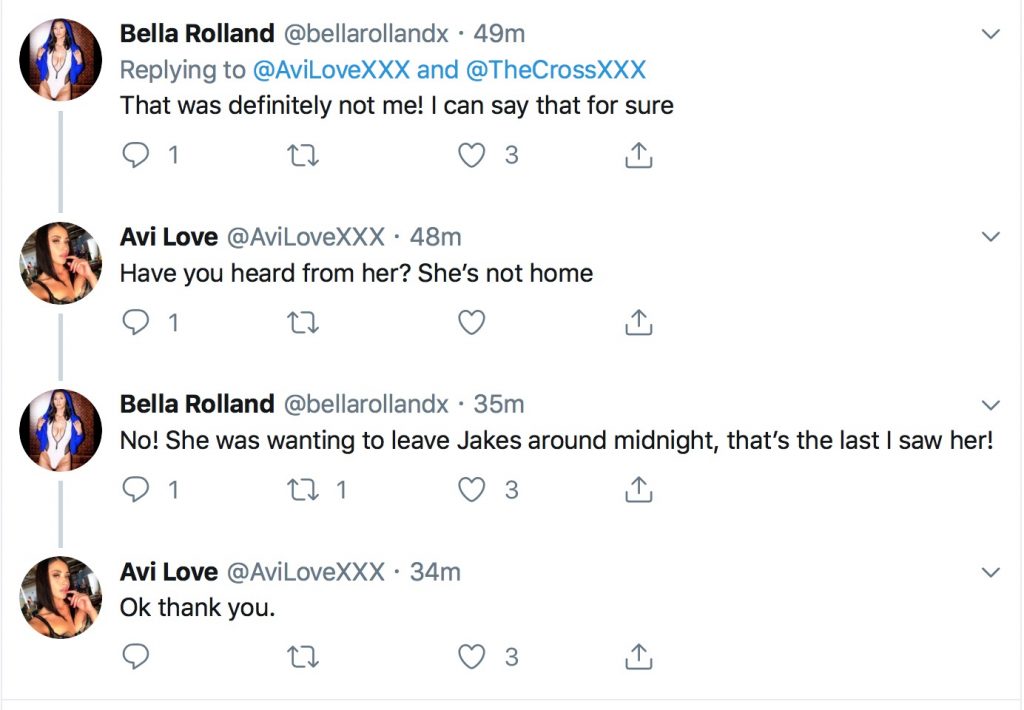