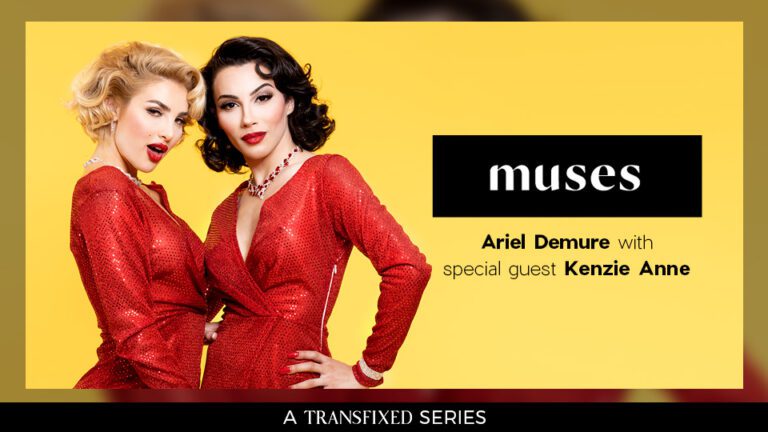 Share
Facebook Twitter LinkedIn Pinterest Email
(Montreal, QC / October 26, 2022) — Adult Time studio Transfixed announces that its luxury showcase series MUSES, ‘unveiling the desires of our favorite trans actresses’, has selected Ariel Demure as its October MUSE.
Director Stella Smut goes all in on vintage glam in Demure’s showcase scene with special guest Kenzie Anne, dressing the duo in body-hugging ruby red sequined gowns in a cheeky nod to the classic 1953 film Gentlemen Prefer Blondes and its opening musical sequence, “Two Little Girls from Little Rock”.
“Working on Ariel Demure’s Muse shoot was a dream come true! I grew up watching MGM musicals featuring Marilyn Monroe and Jane Russell; singing the duet this scene was based off of far too often in the shower,” said Smut. “Getting to direct and photograph this for Ariel was an honor. Ariel Demure is the Muse of all Muses. She’s so wickedly talented, funny, and beautiful. Just a  wildly intelligent and down-to-earth human. Being an ex-theatre kid and natural slut for Broadway just made this  project that much more fun to shoot and I hope the fans enjoy it as much as we did making it.”
“In many ways this scene was quite literally a dream come true; almost instantly when I learned about the MUSES project, I knew what I wanted to do for my turn at the helm,” enthused Demure. “An homage to the iconic film Gentlemen Prefer Blondes, starring Jane Russell and Marilyn Monroe, has been a goal of mine for years.
“Kenzie Anne, visually, is our modern day Marilyn Monroe without question, and the brassy no-nonsense air of Miss Russell is something I’ve always aspired to. This project is one of my crowning achievements, and I hope the fans appreciate it as much as I do, for the opportunity to be a part of it.”
To learn more about MUSES, follow @transfixedcom and @Adulttimecom on Twitter for more info and production news, and join AdultTime.com to enjoy unlimited access to more than 350 channels, 61,000 episodes and 8 new releases per day of the network’s award-winning brands.
About Transfixed:
An Adult Time Studio created in 2018 by award-winning filmmaker Bree Mills, Transfixed is a celebration of adult’s most beautiful trans and cis female performers in highly stylized translesbian erotica episodes. The acclaimed series is available to subscribers of the Adult Time platform.
About Adult Time:
Launched in 2018, Adult Time is a streaming service exclusively for adults. Created by award-winning filmmaker Bree Mills, who also serves as Chief Creative Officer, Adult Time is a platform built by fans that believe in a future where mature audiences can safely, securely and proudly have a place in their lineup for premium adult content.
Dubbed the ‘Netflix of Porn’ by mainstream media outlets, Adult Time offers an extensive catalog of more than 350 channels, 61,000 episodes and 8 new releases per day from some of the most recognized studios, including Girlsway, Pure Taboo, Burning Angel, Fantasy Massage, 21 Sextury and Vivid Entertainment alongside exclusive original series, feature films and much more.
For more information, please visit:
http://www.adulttime.com
Follow on Twitter & Instagram:
@adulttimecom
@thebreemills
Media Inquiries:
Brian Gross
BSG PR
818-340-4422
brian@bsgpr.com