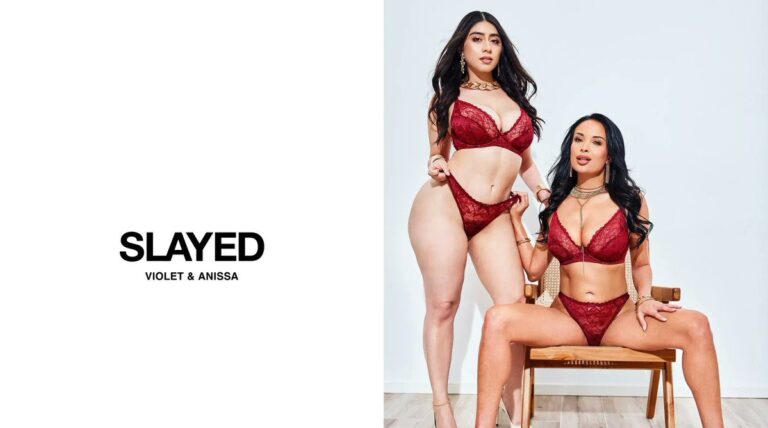 Share
Facebook Twitter LinkedIn Pinterest Email
(Hollywood, CA) Real-life Hentai girl, influencer, YouTuber, and Vixen Media Group (VMG) exclusive contract star Violet Myers has returned to the quintessential new all-girl site, Slayed, for another incredible scene that plays on hot sexual tension.
Directed by Derek Dozer, “Confrontation” lives up to its title, and has Violet Myers showing up on her teacher Anissa Kate’s doorstep. Anissa answers the door in her satin robe and informs Violet that her boyfriend left an hour before. Not saying a word, Violet enters her house with an annoyed look on her face. Wearing a light blue ensemble of a short skirt and a very cleavagey top, Violet commands your attention. Violet then tells Anissa she’s not there because she fucked her boyfriend; she’s there because she didn’t fuck her. Violet unties her top and exposes her amazing breasts, leaving Anissa speechless. The sexual tension that has been simmering all semester is now something neither can ignore. Violet and Anissa Spend the afternoon making each other cum over and over again.
Watch the trailer and exclusive scene for “Confrontation” at slayed.com/videos/confrontation, and make sure to “favorite” the scene to let Slayed know how much you enjoyed it.
“My Slayed scene with Anissa is one of my hottest girl/girl scenes to date. Her accent is so sexy, and our Frenching between the sheets was an incredible afternoon. Make sure to watch it. If you’re not a Slayed member, you’re missing out on some amazing content. So, join now since I will be on the site more often,” says Violet Myers.
Catch up on Violet’s Slayed scenes and watch her debut “Deliverables” with Vicki Chase at slayed.com/videos/deliverables.
Violet Myers is available exclusively through OC Modeling. View her agency photos at ocmodeling.com/model/violet-myers.
To interview Violet for your site, publication, or show, contact Erika Icon of The Rub PR at erika@therubpr.com.
ABOUT VIOLET MYERS