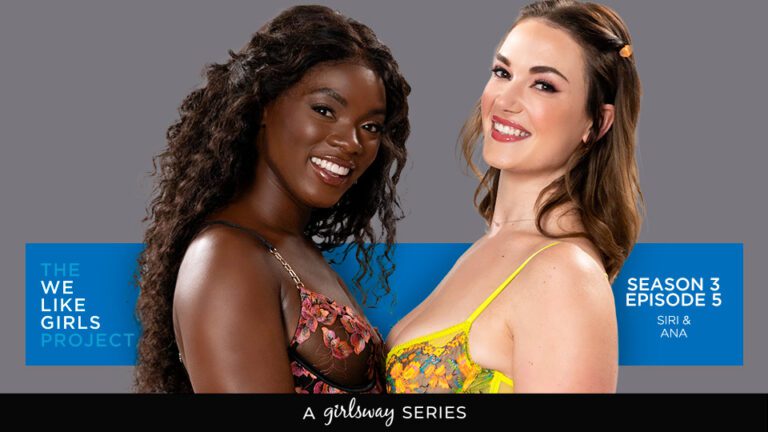 Share
Facebook Twitter LinkedIn Pinterest Email
(Montreal, QC / December 12, 2022) — Girlsway’s popular lesbian documentary series from Bree Mills, The We Like Girls Project, aka We Like Girls, makes way for Adult Time Brand Ambassador Siri Dahl as she explores the heavenly body of Ana Foxxx in an explosive encounter that’s out of this world.
Season Three’s Fifth Episode, “Siri & Ana”, continues in the grand erotic tradition of the series’ true-life tales of raw authenticity and palpable passion between two performers that lights up the screen.
“Siri’s chosen partner for the day was none other than the brilliant Ana Foxxx, because Siri has been longing to do a shoot with her. When I asked Siri why, she said it’s because she was hoping to impress Ana. Well, I don’t think anyone can blame her!” explains director Mills, who also serves as Chief Creative Officer at Adult Time. “Ana told me that she thinks Siri is one of the most beautiful women in the industry, and she was thrilled that Siri chose her… so thrilled that she had goosebumps! I hope you enjoy watching them!”

Dahl added, “My We Like Girls scene with Ana Foxxx is a dream come true. We’ve known each other for years and she was at the top of my sex scene wishlist for what felt like forever — but good things come to those who wait, and having mind-blowingly hot lesbian sex with one of the most gorgeous women in the industry is a pretty “good thing,” I’d say! I’m so excited for my fans and all of Adult Time’s subscribers to enjoy this beautiful, sensual scene between Ana and I.”

We Like Girls is available on the AdultTime.com streaming platform, home to more than 360 channels, 61,000 episodes and 8 new releases per day from some of the most recognized studios in the industry. Follow @welikegirlsxcom on Instagram and @Adulttimecom on Twitter to find out more info and upcoming production news about the series.
ABOUT WE LIKE GIRLS:
An Adult Time Original Series created by Bree Mills, We Like Girls is an unscripted docuseries featuring authentic lesbian sex experiences by performers who share a genuine connection and affection for each other. Featuring real-life couples, friends with benefits and longtime crushes, the acclaimed series’ three seasons are available for download or streaming on the Adult Time platform.
ABOUT ADULT TIME:
Launched in 2018, Adult Time is a streaming service exclusively for adults. Created by award-winning filmmaker Bree Mills, who also serves as the brand’s Chief Creative Officer, Adult Time is a platform built by fans who believe in a future where mature audiences can safely, securely and proudly have a place in their lineup for premium adult content.
Dubbed the ‘Netflix of Porn’ by mainstream media outlets, Adult Time offers an extensive catalog of more than 320 channels, 58,000 episodes and 8 new releases per day from some of the most recognized studios, including Girlsway, Pure Taboo, Burning Angel, Fantasy Massage, 21 Sextury, and Vivid Entertainment, alongside exclusive original series, feature films, and much more.
For more information, please visit:
http://www.welikegirls.com
http://www.adulttime.com
Follow on Twitter & Instagram:
@welikegirlsxcom
@adulttimecom
@thebreemills
Media Inquires:
Brian Gross
BSG PR
818-340-4422
brian@bsgpr.com
# # #
21 Sextury adult time Ana Foxxx bree mills burning angel Fantasy Massage feature films girlsway original series Pure Taboo Siri Dahl Vivid Entertainment
Share. Facebook Twitter Pinterest LinkedIn Tumblr Email
Previous ArticleNew at ORION Wholesale: Erection enhancer with a ball massage from REBEL
Next Article Misha Montana Honored with 2023 XBIZ Award Nomination for Best Sex Scene-Gonzo