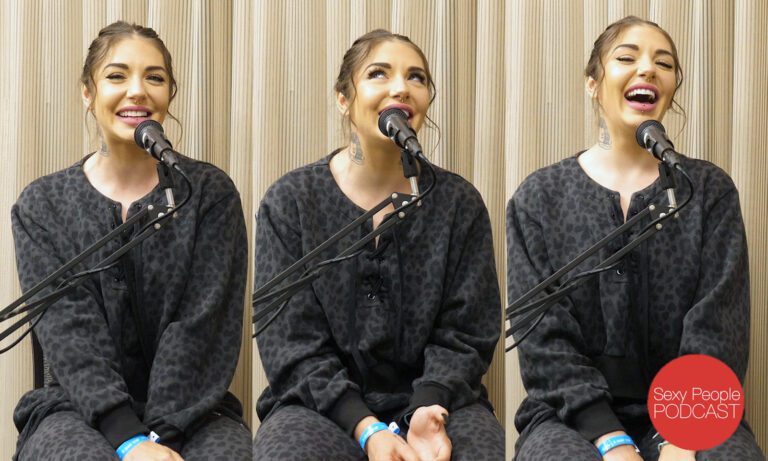 Share
Facebook Twitter LinkedIn Pinterest Email
(NEW YORK, N.Y. / October 25, 2022) — Brenna McKenna opens up in a revealing conversation as the featured guest on Dan Frigolette’s “Sexy People Podcast,” available now.
Porn’s inked dynamo was spending the weekend greeting fans at the EXXXOTICA New Jersey expo when she sat down with Frigolette for the behind closed doors interview that gets emotional at times.
“Brenna is as authentic, interesting, witty, and adorable as can be,” said Frigolette. “I’m so excited to share this episode with listeners. Available for video on Youtube and everywhere podcasts are for audio. Listen for an insightful, challenging and emotional interview.”
McKenna commented, “I felt like I was exactly where I was supposed to be on the ‘Sexy People Podcast!’  Dan and I were able to have a beautiful conversation with such fluid exchange and chemistry! Since it’s up online (a day later), I’ve already gotten feedback that it’s the best interview I’ve done yet.”
Enjoy Episode 197 of the “Sexy People Podcast” featuring Brenna McKenna here ( https://www.youtube.com/watch?v=C8ltQsd0AVo ).
Find Dan Frigolette on Twitter: @DanFrigolette.
Connect with Brenna McKenna on Twitter: @BrennvMcKennv and Instagram: @BrennvMcKennv.
Brenna McKenna fans are invited to check her out on FreeOnes: freeones.com/brenna-mckenna.
McKenna treats admirers to an unparalleled level of access via her OnlyFans account, which is updated daily with images and videos that you can’t see on her public accounts.
Read her revealing AdultDVDTalk interview here, and find her October 2022 profile in NightMoves Magazine here.
About Brenna McKenna:
One of the most classically beautiful women to ever grace adult films, Brenna McKenna is also a supernova of sexual energy and positive attitude.
Born and raised on the southern end of the great state of New Jersey, Sunday churchgoer McKenna attended a private high school on a softball scholarship before putting herself through college in Philadelphia as a stripper. After earning her business degree in Fashion Industry Management, she realized that she loved exotic dancing so much, she decided to make it her career.
For the 21 year-old, stripping had opened a path on her life’s journey of exploring her hitherto unexcavated sexual powers. But when the COVID pandemic panic came, and gentlemen’s clubs were shuttered, McKenna pivoted to OnlyFans. She eventually reached out to an adult talent agency, and filmed her debut porn scenes in March 2021.
Since then, the magnetic performer has divided her work time between the Los Angeles, Las Vegas and Miami filming hubs, producing her own content and starring in productions by Bang Bros, LeWood, Bang!, Mike Adriano, She Seduced Me, Team Skeet, FreakMob Media, Sex Selector, Perv City, Swallowbay, and many more.
With years of stripping experience under her belt, McKenna has also moved into feature dancing by signing with industry leader The Lee Network and debuting at New York City’s famed Sapphire 60 gentlemen’s club in June 2022.  In October she was a presenter as the 30th annual NightMoves Awards in Tampa, Florida.
She resides in Philadelphia.
Contact:
Michael Whiteacre
HoneyHouse PR
PR@HoneyHouseXXX.com
775-742-8425
Twitter: @HoneyHousePR
#   #   #
Bang Bros Bang! Brenna McKenna FreakMob Media LeWood Mike Adriano Perv City Sex Selector Sexy People Podcast She Seduced Me Swallowbay Team Skeet
Share. Facebook Twitter Pinterest LinkedIn Tumblr Email
Previous ArticleFans Utopia Sells a Porn Fantasy on Behalf of the Industry’s Overworked Stars
Next Article TeamSkeet Showcases 13 All-New Scenes, Plus Special Halloween Sale