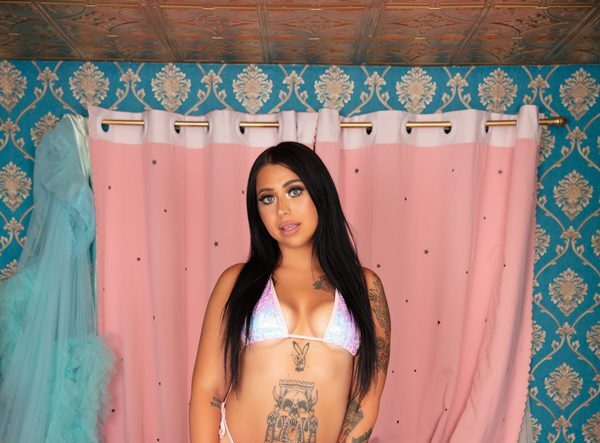 This is the second go-round with Conor Coxxx’s renowned agency: Mor – formerly Mia Kay – was on the Coxxx Models roster back in 2017 before taking a two-year break in 2020. Now she’s ready to get back into studio shoots in South Florida and Chicago.

“It was a pleasure working with Mia when she was new to the industry, and we are thrilled she is back and with the agency once again,” said Coxxx of his former and now-current client. “We look forward to assisting her in the next chapter of her career.”

Mor celebrated her return to the biz with a recent appearance at Coxxx Models’ exhibit booth at this year’s Exxxotica Miami, which she mused was the exact place that cemented her enthusiasm for the industry only a few short years ago.

“One of my favorite experiences was visiting and signing at my very first Exxxotica back in my home city of Chicago, Illinois,” she said. “It was so much fun to meet everybody and feel a part of a very open and accepting community.”
Mia Mor is available for Feature Dancing, Stills, Fetish, Solo, G/G, FJ, HJ, BJ, B/G, Facial & Swallow and her booking information can be found on her official CoxxxModels.com model page.

These days, Mor shoots content in both the Windy City and South Florida while studying for a degree in Psychology. In her spare time, she volunteers at a humane society, enjoys hardcore/emo music and chilling at home with her two cats, Peach and Tito. Mor is excited to make her return to the industry and Coxxx Models, and fans can find her at AllMyLinks.com/yourbabymia.

Coxxx Models, founded in 2012 by performer, musician, and entrepreneur Conor Coxxx, is a full-service adult talent agency dedicated to bringing models and producers together for professional assignments in Los Angeles, Miami, Tampa, Las Vegas, New York, Atlanta and across the United States.
With comfort and safety as its highest priority, Coxxx Models works closely with talent in order to develop and expand their careers, while being sensitive to clients’ individual needs and limitations, and prides itself on providing speedy service and correspondence, as well as a crystal-clear booking process to fast-track production hires with the utmost efficiency and care. Contact CoxxxModels.com and Conor@CoxxxModels.com to get started.
# # #
Press and media contact:
Brian S. Gross | BSG PR | 818.340.4422 | brian@bsgpr.com | @bsgpr
coxxx models Mia Kay Mia Mor
Share. Facebook Twitter Pinterest LinkedIn Tumblr Email
Previous ArticleValentina Bellucci Offers Thanks, Gratitude to Exxxotica Miami Fans for Signing Debut
Next Article Ireland’s Justice Minister Calls Porn ‘Too Accessible’