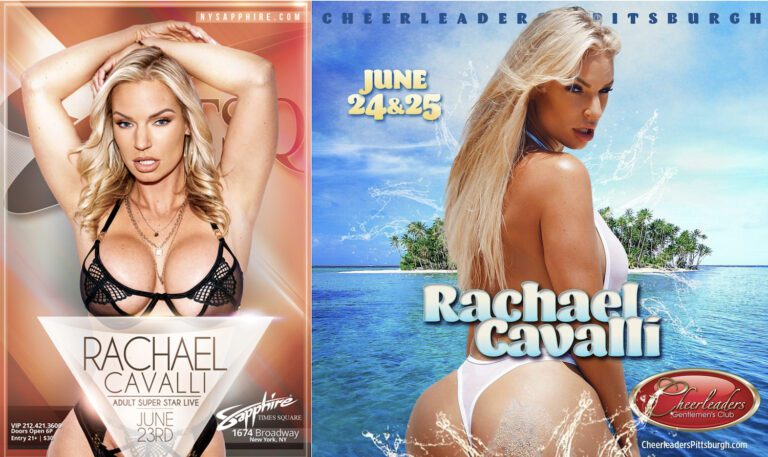 Share
Facebook Twitter LinkedIn Pinterest Email
(Hollywood, CA) Statuesque blonde bombshell, All-American MILF adult star and mainstream fashion model Rachael Cavalli is set for a mini feature starting on Thursday, June 23rd. She’s appearing for one night only at Sapphire Times Square, then she’s headlining for two nights, Friday, June 24th and Saturday, June 25th, at Cheerleaders in Pittsburgh, PA.
The East Coast better be ready for a Rachael Cavalli takeover! She’s doing a mini feature tour starting in NYC and ending in Pittsburgh. Thursday night, Rachael’s headlining at Sapphire Times Square. She’s set to do a meet and greet and a live midnight stage show at the infamous gentlemen’s club. Sapphire Times Square is located at 1674 Broadway in NYC. Find out how to go VIP or get up close and personal with the stunning adult star with an Adult Star Package at nysapphire.com/NY-Sapphire-Times-Square-Adult-Star-Rachael-Cavalli-Live.html.
Friday and Saturday nights, Rachael be at the second stop on her mini feature tour, Cheerleaders in Pittsburgh, PA. Each night Rachael will hit the stage multiple times, showing off her sexy costumes and engaging the crowd in highly entertaining sets. And she’ll also have multiple meet and greets for her fans and club patrons to get up close and personal. Cheerleaders is located at 3100 Liberty Ave. in Pittsburgh. Find out more about the venue and Rachael’s appearance at cheerleaderspittsburgh.com.
At both Sapphire Times Square and Pittsburgh Cheerleaders, Rachael will be selling her exclusive merchandise, ready for selfies with fans and club patrons, and be available for VIP lap dances at a price.
“I’m excited to be appearing at Sapphire Times Square and Cheerleaders in Pittsburgh! My East Coast fans are the best, are so supportive, and I can’t wait to see them! If you’re in NYC and/or Pittsburgh areas, you definitely want to come to my features—we have a lot of fun, there are always surprises, and it’s a great way to meet me,” says Rachael Cavalli.
Get Rachael on the stage of your gentlemen’s club by booking her through the Centerfold Features. Go to centerfoldfeatures.com and click on “Contact Us” to reach her agents. Or visit Rachael’s page on the site centerfoldfeatures.com/current-talent/adult-film-stars/rachael-cavalli and click “Book Now.”
To interview Rachael for your site, publication, or show, contact Erika Icon of The Rub PR at [email protected].
ABOUT RACHAEL CAVALLI
Statuesque blonde bombshell Rachael Cavalli is an All-American MILF adult star and mainstream fashion model. Although she hails from the Midwest, you would swear she’s a California Girl with her love of the beach and roller skating. Before entering the adult arena, she was in college and tending bar, but after meeting a few friends in the industry she decided to give it a try.