For SEC Chairman Bitcoin is the only crypto that is a commodity. 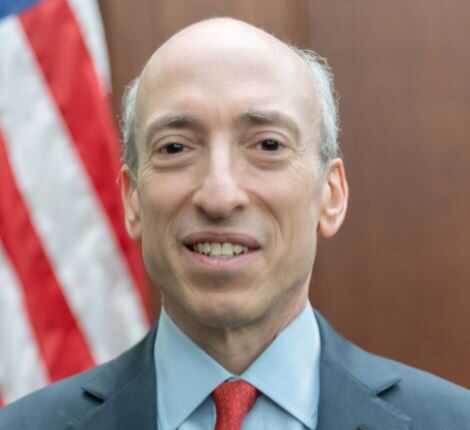 Gary Gensler, the chairman of the Securities and Exchange Commission, has stated that Bitcoin (BTC) is the only cryptocurrency he considers outside the SEC’s regulatory purview.

According to the SEC’s Chairman, the world’s largest cryptocurrency by market capitalization is the only digital currency believed to be a commodity, which is subject to be regulated by the Commodity Futures Trading Commission (CFTC).

Gensler made this known during a CNBC interview earlier today. Following Gensler’s comment, it is obvious that the SEC views all other coins, including Ethereum (ETH), as digital currencies that fall under its regulatory oversight.

“In many altcoins, the Public is hoping for a return just like in other financial assets we call securities, and many of these crypto assets have key attributes of security… Bitcoin is the only one I am going to say… it’s a commodity.”

Since 2018, many crypto players have believed that ETH is also a commodity after William Hinman, the former director of the SEC’s Corporation Finance noted in his controversial speech that the second-largest cryptocurrency is a commodity.

However, Gensler, who was not in charge of the SEC’s affairs at the time, does not seem to agree with Hinman’s classification of Ethereum, as he refused to add ETH to the list of cryptocurrencies that should be regulated by the CFTC.

John Deaton representing the Ripple community in the Ripple Vs SEC lawsuit says “What have I and my 68K friends been saying all along. Every altcoin is in danger.” 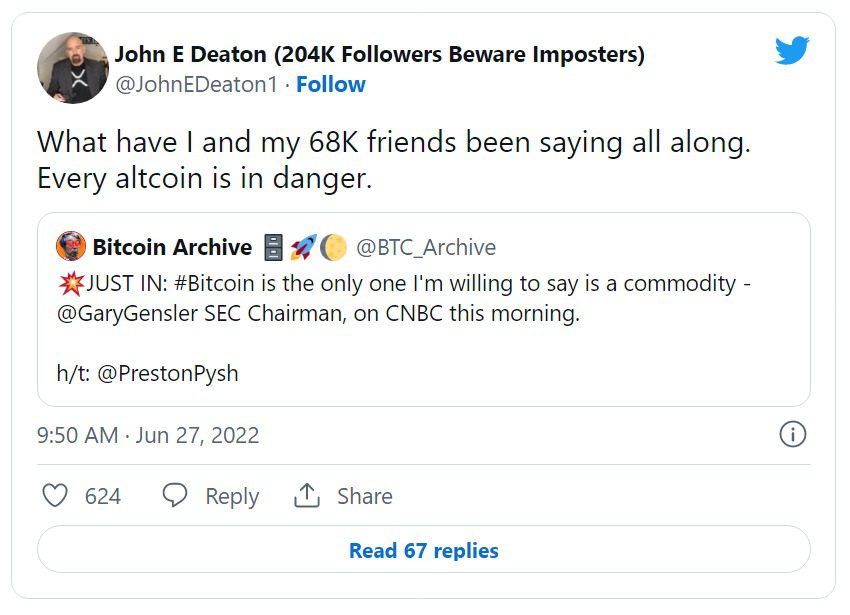 Other Cryptocurrencies in Trouble?

Recall that the SEC charged Ripple and two of its executives, Brad Garlinghouse and Chris Larsen, in late 2020 for conducting an unregistered securities offering.

The case has lingered for over a year, with some attorneys predicting that the lawsuit may end by March next year.

With the SEC chairman considering only Bitcoin as a commodity, it is expected that other digital currencies may endure a similar fate as Ripple and it is only a matter of time before the Securities and Exchange Commission (SEC) slams a fresh lawsuit against these crypto projects.

Lele Jima
is a cryptocurrency enthusiast and journalist who is focused on educating people about how the nascent asset class is transforming the world. Aside from cryptocurrency-related activities, Jima is a lover of sports and music.
altcoins bitcoin sec
Share. Facebook Twitter Pinterest LinkedIn Tumblr Email
Previous ArticleShiba Inu Soars Above 40% In Seven Days As Unification Brings Shibarium Launch Closer
Next Article MYLF Brings the Summer Party to Fans with Five Fun New Scenes