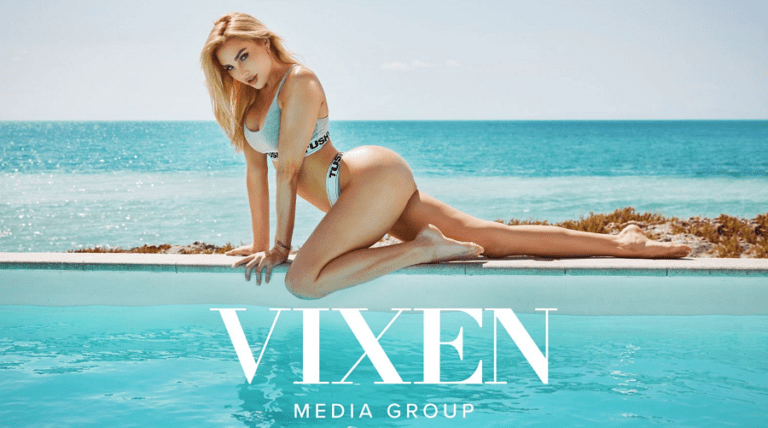 Share
Facebook Twitter LinkedIn Pinterest Email
LOS ANGELES (June 27, 2022) – Vixen Media Group, the leader in luxury adult entertainment, announces the exclusive debut of “Heiress”, a new scene showcasing 2022 XBIZ Best New Performer and industry fan favorite, Kenzie Anne. Produced and directed by Julia Grandi, the new high demand scene has been released on Vixen Media Group’s renowned site, Tushy.
“Meeting Kenzie to create a masterpiece for her first anal studio performance was an incredible honor, and I’m beyond proud of the results. Instantly, we had an amazing connection between performer and director. We understood each other and connected on what it was going to take for this scene to be epic.”  said VMG Director, Julia Grandi. “Kenzie is such an incredible talent with an amazing personality and I cannot wait for the opportunity to work with her more in the future.”
Filmed in one of the Caribbean’s most prestigious Island destinations, and shot with the brand’s infamous crisp high-end aesthetic, Kenzie takes front and center as the lead star of “Heiress”. In collaboration with Christian Clay, the memorable duo performs her first-time studio shot anal scene.
Following a successful career in fashion modeling, Kenzie decided to take the bold plunge to explore her sexuality further by pairing up with Vixen for her official studio debut in spring of 2021. Quickly finding herself at the top as a leading star on the big screen of adult entertainment, her career began to skyrocket. Continuing to have spotlight appearances in some of Vixen Media Group’s most influential scenes across their portfolio of brands – Blacked, Blacked Raw, Deeper and Slayed – Tushy remained the exception, until now.
“Filming in such a luxurious destination was a dream come true. Traveling for work has always been a goal of mine, so when the opportunity to shoot my anal debut for Tushy, on a tropical island came up, I jumped on it right away,” said Kenzie. “Julia Grandi and the team at Vixen Media Group went above and beyond to make my experience absolutely unforgettable and is a memory my soul will always revisit.
Viewers can watch Kenzie’s unforgettable first time debut on Tushy. For exclusive updates, follow Tushy on Twitter and Instagram. To learn more about Vixen Media Group, visit  vixengroup.com.
About Vixen Media Group
Founded in 2014, Vixen Media Group is the premier online destination for exclusive and luxury adult content. Featured in Rolling Stone, Forbes, The Daily Beast, BuzzFeed, Men’s Health, Vice and other outlets, Vixen Media Group’s network of branded websites have more than 30 million visitors each month with more than nine million Instagram followers. Its innovative studios – Vixen, Blacked, Tushy, Deeper and Slayed – have earned more than 100 awards. To learn more, visit vixengroup.com.
###
Media Contact: Brian S. Gross | BSG PR | 818.340.4422 | brian@bsgpr.com
heriess kenzie ann tushy Vixen Media Group
Share. Facebook Twitter Pinterest LinkedIn Tumblr Email
Previous ArticleLiv Revamped Gives Mick Blue the Ultimate Stripper Fantasy in New Bang! Scene
Next Article Shiba Inu Soars Above 40% In Seven Days As Unification Brings Shibarium Launch Closer