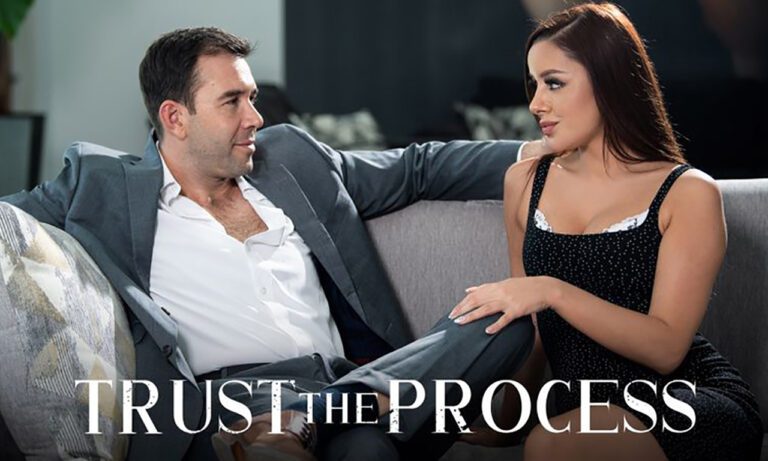 Share
Facebook Twitter LinkedIn Pinterest Email
(LAS VEGAS, Nev. / July 22 2022) — Award-winning adult performer Will Pounder stars in “Trust the Process,” a pervy twist on mainstream hits such as “Suspect” and “Runaway Jury,” created by Anatomik Media for Pure Taboo, the most award-winning taboo studio in adult entertainment.
The handsome leading man, an experienced mainstream actor who appeared on the TV series “A Grunt’s Life,” before joining the adult industry, has chalked up a string of compelling, well-reviewed characterizations of late and is establishing himself as a solid contender for nominations in the year’s top categories.
As “Trust the Process” opens, Sacha, the plaintiff in a jury trial, meets with her lawyer, Bill, while accompanied by her sibling, Linda (Vanna Bardot). Both women are frustrated because the jury hasn’t reached a verdict yet. Linda is confident that one particular juror, Juror 11, has been voting against the majority. Not only that, but he seems like a total sleazeball to her as well. Bill reminds them that they have to trust the legal process, then warns them that, despite their best efforts, they may still lose the case. Linda, refusing to let Sacha lose because of one juror’s ignorance, resolves to take matters into her OWN hands…
A day later, Linda spots Juror 11, named Seth (Will Pounder) near the courthouse and pretends to bump into him. Linda then puts her plan into action, pretending to flirt and fawn over him, which causes Seth to take an interest in her. Claiming that she is writing an article on the trial for her college newspaper, Linda manages to get Seth to invite her over to his house to talk more about the proceedings (though it’s clear from the way he checks her out that he wants to do more than talk).
Seth brings Linda into his home and they start talking about his role in the trial. He admits he wishes the trial could end so that he could go back to his normal life, causing him to confirm to Linda that he is indeed the juror holding back the verdict. NOW it’s time for Linda to do whatever it takes to sneakily convince Seth into changing his verdict…
“This was a really good, fun scene to create and the end result is terrific,” said Pounder.  “Some nice acting in it all around — I’m proud of this one.”

“Trust the Process” is available for streaming and download at PureTaboo.com ( https://www.puretaboo.com/ ).

Find Vanna Bardot on Twitter: @vannanardot.
Renowned for his reliability as both an actor and a sexual performer, Pounder is one of the adult film world’s busiest and most esteemed male performers.
Pounder is available for professional bookings by reputable producers. For booking, contact him via [email protected].
Learn more about Will Pounder at his official website iWillPounder.com, and via Twitter: @thewillpounder and Instagram: @IWillPounder.
Check out Pounder’s online adult content:
OnlyFans: WillPounder
ManyVids: Will Pounder
About Will Pounder
Will Pounder is one of the adult film world’s busiest and most esteemed male performers.
In addition to his steady flow of scene work for top studios including Deeper, Brazzers, Reality Kings, New Sensations, Adam & Eve, Evil Angel, Penthouse, Bellesa Films, Hustler Video and MissaX, the rock-steady Pounder has earned a reputation as the king of VR scenes, frequently anchoring shoots for companies such as VR Bangers, Pornhub Originals VR, and WankzVR.
“I must say I’m incredibly grateful,” Pounder remarked. “I’m just a guy from a small town trying to make it in a grown man’s world. I feel like I’m living in a dream working with such beautiful women. Is this even real?”
A devoted health & fitness advocate and accomplished mixed martial artist, while in the Marine Corps he competed on weekends, taught the All-Marine Grappling Team, ran the All-Marine Competition Team at Camp Pendleton, and started the jiu-jitsu club in Marine Corps Air Station Miramar in 2008.
After appearing on the TV series “A Grunt’s Life,” Pounder joined the adult industry in 2017.
In August 2019, he competed in a team grappling tournament televised by UFC Fight Pass, fighting on the team captained by former UFC welterweight, mixed martial artist and boxer Chris “Lights Out” Lytle, and in June 2022 he hosted the SUBVERSIV 7 team grappling tournament on digital streaming service FITE TV,
Pounder was honored with two awards, including the coveted the Best Male Newcomer trophy, at the January 2020 AVN Awards ceremony in Las Vegas.
In February 2020, he shared real-world advice to veterans on how to succeed in the adult film business in an interview with American Grit ( https://www.americangrit.com/2020/02/26/former-marine-wins-adult-video-award/ ), and in April, Pounder was profiled in Daily Star Online ( https://www.dailystar.co.uk/love-sex/former-marine-turns-vr-porn-21846059.amp ). “Because of the worldwide quarantines, social distancing, and curfews due to the pandemic, people are longing for physical contact and a sexual release,” Pounder explained. “Adult entertainment, and especially virtual reality, has come to the rescue, to provide much-needed relief and entertainment — from the safety one one’s own home.”
In January 2021, Pounder took home the trophy for Best Virtual Reality Sex Scene at the 38th annual AVN Awards. In 2022, he was nominated for two AVN Awards, including Best Actor – Featurette, for his dynamic and commanding work opposite Gianna Dior in “Can Never Make It Up To You” (Pure Taboo).
He resides in Las Vegas.
Contact:
Michael Whiteacre
HoneyHouse PR
[email protected]
775-742-8425
Twitter: @HoneyHousePR
#   #   #
Anatomik Media Pure Taboo Trust the Process Will Pounder
Share. Facebook Twitter Pinterest LinkedIn Tumblr Email
Previous ArticleCoTweets – Partner with a Friend to Build Followers
Next Article Vixen Media Group Hosts First, International and Double Crowning Vixen Angel Event in Ibiza